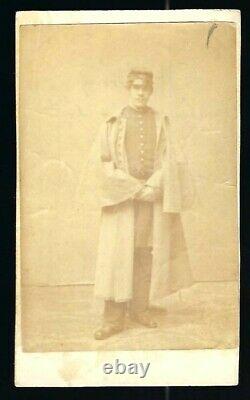 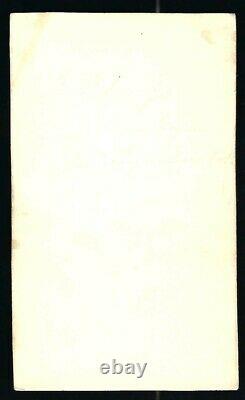 CDV of Bvt Major Francis William Loring of the 24th and 38th Mass Vols. Signed in very faint period pencil on the verso and also is a published image of him being in the Mollus collection. Served 9/61-5/64 rising from Sgt Major to Bvt Major. Died in Austria in 1905.

Francis William Loring was born in Boston, Mass. On 26 May 1838, the son of William Joseph Loring and Anna (Thorndike) Loring. He graduated from Harvard in 1859. 1861, he enlisted and served as sergeant major in the 24th Massachusetts Infantry.

1862, he was commissioned first lieutenant and adjutant in the 38th Massachusetts Infantry and later, on 27 Jan. 1863, appointed aide-de-camp for Gen. Emory of the 19th Corps. After the war, Loring worked as a cotton broker and agent in Boston, writing a book with his partner Charles F.

Atkinson entitled Cotton Culture and the South Considered With Reference to Emigration Boston: A Williams & Co. Loring then became an artist and lived in Europe after 1875, particularly in Florence, Italy. 1896, he married Caroline Lyttelton Pole-Carew. He died at Merano, Italy (then Meran, Austria), on 29 Oct.

This collection consists of papers of Francis "Frank" William Loring of Boston, Mass. Primarily letters written to his mother Anna (Thorndike) Loring and sister Mary "Mollie" Greely Loring, as well as his uncle Charles Greely Loring, brother William Joseph Loring, and others, during his Civil War service in the 24th and 38th Regiments, Massachusetts Volunteer Infantry, and as aide-de-camp of Gen. Many of the letters include drawings.

The collection also contains some letters to Loring from Gen. Emory, Peter French, and others; letters from Mary to her mother on a trip South, May 1865; letters of recommendation written to Massachusetts Governor John A. Andrew, on behalf of Loring, by his uncle Charles and other prominent family members and friends; commendations and military orders; and printed and manuscript military maps. This item is in the category "Collectibles\Militaria\Civil War (1861-65)\Original Period Items\Photographs". The seller is "civil_war_photos" and is located in this country: US. This item can be shipped worldwide.