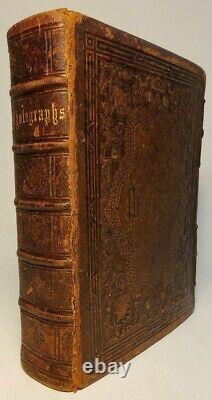 [US COLORED TROOPS UNITS, CDV ALBUM, US CIVIL WAR]. On offer is an ORIGINAL USCT (UNITED STATES COLORED TROOPS) CIVIL WAR UNIT CDV ALBUM. This rare and important album features members, friends and family of a soldier who served in the 36th and or 38th USCT units in during the US Civil War. This album features 119 CDV s across 18 double-sided leaves (36 pages) in a leather album secured by two brass strap clasps. The album is in excellent condition with hinges sound and serviceable. The front endpaper of the album has an old gaul ink notation. A slight token of regard from his friend and fellow soldier. For the 119 total CDV s , they roughly break down as follows. Are known / identified soldiers all of whom seem to be affiliated with some unit of the USCT (United States Colored Troops).

Are other people who were near other known soldiers in the album or are interesting images i. The figure with the weird mask / and hat combo holding the basket??? (we have no idea what is going on there).

Another 86 images of which 33 are more adult men who also could be soldier friends, or relatives of Hoyt (who we believed owned the album and included other images while he owned it). We want to detail as much as possible the specific soldiers and surnames we see in the album. Figuring prominently in the album is the surname Baldwin.

John Martin Unknown unit, but appears to be an officer based on the shoulder bars. (trimmed signature on back of image).

Ely Wright (no rank given) Inscribed on verso. Hoyt was the giftee of this album from John H. Russell as per inscription at front of album. He is also perhaps the related individual through marriage? To the Baldwins which are prominent in the album. A second image of him is also part of the group with him showing more of his torso and officers coat. (album annotated w/ his name). Clearly a General (with arms folded) but we have yet to confirm his name or his unit. (name signed on back of card). Unknown officer w/ left arm holding jacket just beneath a medal. On image verso is a stamp of B. Rehner & Son Indianola, Texas Jan. 17, 1867 in blue ink We know some USCT units mustered out in Indianola, TX. In what looks like an old VMI cadet uniform standing next to a chair. One with hat, one without. (inscribed on rear of one image).

Name is difficult to read, but rank and unit are readable; we may decipher the name in time (inscribed on image verso). (inscribed on image verso) Nice image of him posing seated holding drawn calvary sword. Patrick - Brevet Major General Although not a USCT officer, he was a Major General of Volunteers and was from New York which is where we believe the association here is derived. Allen Two images, neither of which seem to be in military uniform, however both are inscribed as your friend. Four more unidentified images of obvious soldiers (3 officers, 1 enlisted) Requires additional research.

Based on how these were grouped in the album, the likelihood of them being USCT are very high. The item "CIVIL WAR USCT CDV PHOTO ALBUM COLORED TROOPS OFFICERS IL, NY UNITS" is in sale since Wednesday, April 28, 2021. This item is in the category "Collectibles\Photographic Images\Vintage & Antique (Pre-1940)\CDVs".

The seller is "bibliomonster" and is located in Beverly Hills, California. This item can be shipped worldwide.