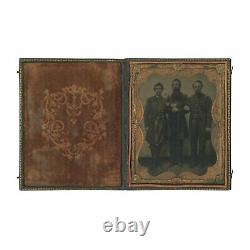 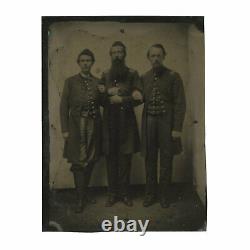 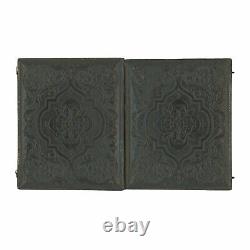 This is a beautiful half plate tintype (4 1/4 x 5 1/2) showing three Union officers posed arm-in-arm in a brotherly embrace. This image originally came in a wooden frame (included) with the name Henry Jerauld written on it. An internet search of that name revealed another known image of Jerauld, which looks just like the man on the left of the tintype. Jerauld served in the 80th Indiana, a regiment that saw action at Perryville, Atlanta, Franklin, and Nashville. He enlisted as a sergeant in the fall of 1862, was commissioned first lieutenant in February 1863, and resigned in March 1864.

Further research on the 80th led to identifications of the other two men. The bearded officer in the middle is Captain Isum Gwin.

Printouts of the photographs identifying each of the three men will be included with the tintype. The image itself is in very good condition with some light scratches in the surface of the plate, particularly where the mat has rubbed on it. The pressed paper case is complete, but has a repaired hinge. Really a wonderful image, and in the rare half plate size.