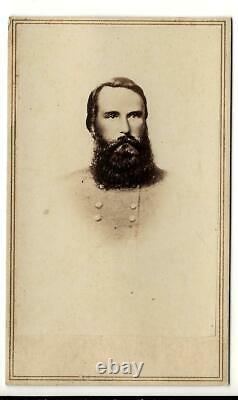 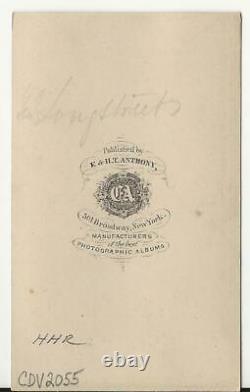 James Longstreet (January 8, 1821 January 2, 1904) was one of the foremost Confederate generals of the American Civil War and the principal subordinate to General Robert E. Lee, who called him his "Old War Horse". He served under Lee as a corps commander for most of the battles fought by the Army of Northern Virginia in the Eastern Theater, and briefly with Braxton Bragg in the Army of Tennessee in the Western Theater.

After graduating from the United States Military Academy at West Point, Longstreet served in the MexicanAmerican War. He was wounded in the thigh at the Battle of Chapultepec, and afterward during recovery married his first wife, Louise Garland. Throughout the 1850s, he served on frontier duty in the American Southwest. In June 1861, Longstreet resigned his U. Army commission and joined the Confederate Army. He commanded Confederate troops during an early victory at Blackburn's Ford in July and played a minor role at the First Battle of Bull Run. Longstreet made significant contributions to several important Confederate victories, mostly in the Eastern Theater as one of Robert E. Lee's chief subordinates in the Army of Northern Virginia. He performed poorly at Seven Pines by accidentally marching his men down the wrong road, causing them to be late in arrival, but played an important role in the Confederate success of the Seven Days Battles in the summer of 1862, where he helped supervise repeated attacks which drove the Union army away from the Confederate capital of Richmond. Longstreet led a devastating counterattack that routed the Union army at Second Bull Run in August.

His men held their ground in defensive roles at Antietam and Fredericksburg. He did not participate in the Confederate victory at Chancellorsville, as he and most of his soldiers had been detached on the comparatively minor Siege of Suffolk.

Longstreet's most controversial service was at the Battle of Gettysburg in July 1863, where he openly disagreed with General Lee on the tactics to be employed and reluctantly supervised several unsuccessful attacks on Union forces, including the disastrous Pickett's Charge. Afterwards, Longstreet was, at his own request, sent to the Western Theater to fight under Braxton Bragg, where his troops launched a ferocious assault on the Union lines at Chickamauga that carried the day.

Afterwards, his performance in semiautonomous command during the Knoxville Campaign resulted in a Confederate defeat. Longstreet's tenure in the Western Theater was marred by his central role in numerous conflicts amongst Confederate generals.

Unhappy serving under Bragg, Longstreet and his men were sent back to Lee. He ably commanded troops during the Battle of the Wilderness in 1864, where he was seriously wounded by friendly fire. Longstreet enjoyed a successful post-war career working for the U.

Government as a diplomat, civil servant, and administrator. His support for the Republican Party and his cooperation with his old friend, President Ulysses S. Grant, as well as critical comments he wrote about Lee's wartime performance, made him anathema to many of his former Confederate colleagues. His reputation in the South further suffered when he led African-American militia against the anti-Reconstruction White League at the Battle of Liberty Place in 1874. Authors of the Lost Cause movement focused on Longstreet's actions at Gettysburg as a primary reason for the Confederacy's loss of the war. Since the late 20th century, his reputation has undergone a slow reassessment. Many Civil War historians now consider him among the war's most gifted tactical commanders. The item "Carte de Visite Civil War Confederate General James Longstreet" is in sale since Saturday, July 31, 2021. This item is in the category "Collectibles\Militaria\Civil War (1861-65)\Original Period Items\Photographs". The seller is "civil_war_photos" and is located in Midland, Michigan. This item can be shipped worldwide.