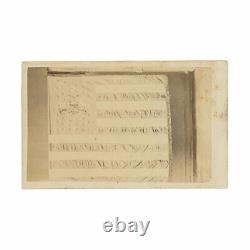 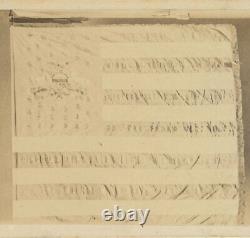 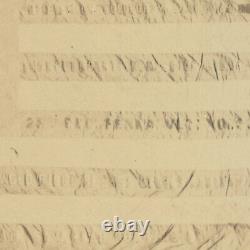 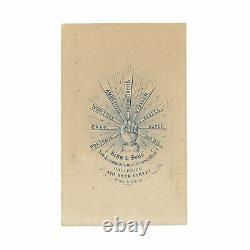 This CDV by Rehn & Sons, Philadelphia, features the second state colors of the 28th Pennsylvania Volunteers. The flag replaced the first state colors that the regiment had carried since March 1862.

The first flag being battle-torn, however, the pictured colors were presented to the regiment May 23, 1865, and would be carried proudly as the men marched in the Grand Review the following day. The names of the many battles in which the 28th was engaged appear in the red stripes of the flag (from the top stripe): Bolivar Heights, Leesburg, Antietam, Chancellorsville, Gettysburg, Lookout Mountain, Missionary Ridge, Ringgold, Rocky-Faced Ridge, Resaca, Dallas, Marietta, Lost Mountain, Savannah, and Charleston. Across the fourth stripe is 28th REG.

The CDV is in excellent condition with light foxing and toning. Measures about 4 x 2 1/2. Rehns imprint appears on the reverse.

The actual flag is preserved today by the Pennsylvania Capitol Preservation Committee and can be seen on their website. The regimental history that follows appears in.

Chapman, James Fitzpatrick, Charles W. This regiment, from different parts of the state, was mustered in at Philadelphia, June 28, 1861, to serve for three years. It contained fifteen companies and from the surplus a battery was formed, called Knap's battery of the 28th Pa. The command left Philadelphia on July 27, for Harper's Ferry and was assigned to Col.

13, it moved to Point of Rocks and guarded the frontier, endeavoring to prevent communication between the Confederates and their sympathizers. Skirmishes ensued at Pritchard's mill, Point of Rocks, Berlin and Knoxville.

In October the battle was fought at Bolivar heights with success to our troops, and as this action was the first victory after Bull Run it was an inspiration and received enthusiastic commendation. The regiment held back a force of the enemy at Noland's ferry, who were on their way to Frederick to encourage the Maryland legislature to secede. During the winter of 1861-62 there were a number of sharp brushes with the opposing forces and in March the troops were able to gain and occupy Leesburg and Upperville, moving from there to Front Royal over disputed ground. Geary was made a brigadier-general, but the regiment remained under his command. It was attached in May to Gen. Banks' division and took part in the battle of Front Royal. Soon, however, it was again assigned to Gen. Geary's command and became part of the 2nd brigade, 1st division, 2nd corps.

Pope, in the Army of Virginia, the regiment fought bravely at Cedar mountain and the second Bull Run. It was engaged at Antietam and in various strategic movements that followed to Harper's Ferry, Leesburg, Winchester, etc. To April, 1863, the 28th was stationed at Acquia creek. Then followed the Chancellorsville campaign, in which it lost a third of its number in the three days battle.

Almost daily engaged, the army won its way to Atlanta. The 28th followed Sherman's army through the Atlanta campaign, the march to the sea, and all its varied service until mustered out on July 18, 1865, near Alexandria, Va. Please see my other items for more Civil War CDVs.