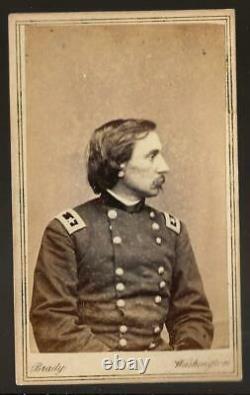 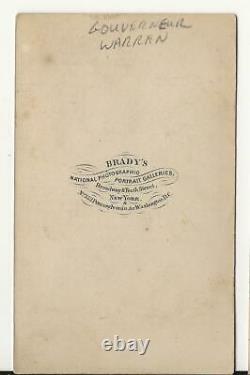 Gouverneur Kemble Warren (January 8, 1830 August 8, 1882) was an American civil engineer and Union Army general during the American Civil War. He is best remembered for arranging the last-minute defense of Little Round Top during the Battle of Gettysburg and is often referred to as the Hero of Little Round Top. His subsequent service as a corps commander and his remaining military career were ruined during the Battle of Five Forks, when he was relieved of command of the V Corps by Philip Sheridan, who claimed that Warren had moved too slowly. Warren was born in Cold Spring, Putnam County, New York, and named for Gouverneur Kemble, a prominent local Congressman, diplomat, industrialist, and owner of the West Point Foundry. His sister, Emily Warren Roebling, would later play a significant role in the building of the Brooklyn Bridge.

He entered the United States Military Academy across the Hudson River from his hometown at age 16 and graduated second in his class of 44 cadets in 1850. [1] He was commissioned a brevet second lieutenant in the Corps of Topographical Engineers.

In the antebellum years he worked on the Mississippi River, on transcontinental railroad surveys, and mapped the trans-Mississippi West. [2] He served as the engineer on William S. Harney's Battle of Ash Hollow in the Nebraska Territory in 1855, where he saw his first combat. He took part in studies of possible transcontinental railroad routes, creating the first comprehensive map of the United States west of the Mississippi in 1857. This required extensive explorations of the vast Nebraska Territory, including Nebraska, North Dakota, South Dakota, part of Montana, and part of Wyoming. One region he surveyed was the Minnesota River Valley, a valley much larger than what would be expected from the low-flow Minnesota River.

In some places the valley is 5 miles (8 km) wide and 250 feet (80 m) deep. Warren first explained the hydrology of the region in 1868, attributing the gorge to a massive river, which drained Lake Agassiz between 11,700 and 9,400 years ago. The great river was named Glacial River Warren in his honor after his death. At the start of the war, Warren was a first lieutenant and mathematics instructor at the United States Military Academy at West Point.

He helped raise a local regiment for service in the Union Army and was appointed lieutenant colonel of the 5th New York Infantry on May 14, 1861. [1][3][7] Warren and his regiment saw their first combat at the Battle of Big Bethel in Virginia on June 10, arguably the first major land engagement of the war. [3] He was promoted to colonel and regimental commander on September 10.

In the 1862 Peninsula Campaign, Warren commanded his regiment at the Siege of Yorktown and also assisted the chief topographical engineer of the Army of the Potomac, Brig. Humphreys, by leading reconnaissance missions and drawing detailed maps of appropriate routes for the army in its advance up the Virginia Peninsula. He commanded a small brigade (3rd Brigade, 2nd Division, V Corps) during the Seven Days Battles consisting of his own 5th New York along with the 10th New York. At Gaines Mill, he was bruised in the knee by a shell fragment, but remained on the field. He continued to lead the brigade at the Second Battle of Bull Run, suffering heavy casualties in a heroic stand against an overwhelming enemy assault, [9] and at Antietam, where the V Corps was in reserve and saw no combat.

Commanders of the Army of the Potomac, Gouverneur K. Humphreys and George Sykes in September 1863. Warren was promoted to brigadier general on September 26, 1862, [1] and he and his brigade went to the Battle of Fredericksburg in December, but again were held in reserve and saw no action.

Joseph Hooker reorganized the Army of the Potomac in February 1863, he named Warren his chief topographical engineer and then chief engineer. As chief engineer, Warren was commended for his service in the Battle of Chancellorsville. At the start of the Gettysburg Campaign, as Confederate General Robert E. Lee began his invasion of Pennsylvania, Warren advised Hooker on the routes the Army should take in pursuit. On the second day of the Battle of Gettysburg, July 2, 1863, Warren initiated the defense of Little Round Top, recognizing the importance of the undefended position on the left flank of the Union Army, and directing, on his own initiative, the brigade of Col.

Strong Vincent to occupy it just minutes before it was attacked. Warren suffered a minor neck wound during the Confederate assault. Promoted to major general after Gettysburg (August 8, 1863), Warren commanded the II Corps from August 1863 until March 1864, replacing the wounded Maj. Hancock, and distinguishing himself at the Battle of Bristoe Station. On March 13, 1865, he was brevetted to major general in the regular army for his actions at Bristoe Station. [1] During the Mine Run Campaign, Warren's corps was ordered to attack Lee's army, but he perceived that a trap had been laid and refused the order from army commander Maj.

Although initially angry at Warren, Meade acknowledged that he had been right. [9] Upon Hancock's return from medical leave, and the spring 1864 reorganization of the Army of the Potomac, Warren assumed command of the V Corps and led it through the Overland Campaign, the Siege of Petersburg, and the Appomattox Campaign. During these Virginia campaigns, Warren established a reputation of bringing his engineering traits of deliberation and caution to the role of infantry corps commander. He won the Battle of Globe Tavern, August 18 to August 20, 1864, cutting the Weldon Railroad, a vital supply route north to Petersburg.

He also won a limited success in the Battle of Peebles' Farm in September 1864, carrying a part of the Confederate lines protecting supplies moving to Petersburg on the Boydton Plank Road. Philip Sheridan, a key subordinate of Lt. Grant, was dissatisfied with Warren's performance. He was angry at Warren's corps for supposedly obstructing roads after the Battle of the Wilderness and its cautious actions during the Siege of Petersburg.

At the beginning of the Appomattox Campaign, Sheridan requested that the VI Corps be assigned to his pursuit of Lee's army, but Grant insisted that the V Corps was better positioned. He gave Sheridan written permission to relieve Warren if he felt it was justified for the good of the service. [10] Grant later wrote in his Personal Memoirs, [11]. I was so much dissatisfied with Warrens dilatory movements in the battle of White Oak Road and in his failure to reach Sheridan in time, that I was very much afraid that at the last moment he would fail Sheridan.

He was a man of fine intelligence, great earnestness, quick perception, and could make his dispositions as quickly as any officer, under difficulties where he was forced to act. But I had before discovered a defect which was beyond his control, that was very prejudicial to his usefulness in emergencies like the one just before us. He could see every danger at a glance before he had encountered it.

He would not only make preparations to meet the danger which might occur, but he would inform his commanding officer what others should do while he was executing his move. Gerhardt's statue of Warren on Little Round Top in Gettysburg.

At the Battle of Five Forks on April 1, 1865, Sheridan judged that the V Corps had moved too slowly into the attack, and criticised Warren fiercely for not being at the front of his columns. Warren had been held up, searching for Samuel W. Crawfords division, which had gone astray in the woods. But overall, he had handled his corps efficiently, and their attack had carried the day at Five Forks, arguably the pivotal battle of the final days. Nevertheless, Sheridan relieved Warren of command on the spot. [12] He was assigned to the defenses of Petersburg and then briefly to command of the Department of Mississippi. Humiliated by Sheridan, Warren resigned his commission as major general of volunteers in protest on May 27, 1865, reverting to his permanent rank as major in the Corps of Engineers. He served as an engineer for 17 years, building railroads, with assignments along the Mississippi River, achieving the rank of lieutenant colonel in 1879. But the career that had shown so much promise at Gettysburg was ruined. He urgently requested a court of inquiry to exonerate him from the stigma of Sheridan's action. Numerous requests were ignored or refused until Ulysses S. Grant retired from the presidency. Hayes ordered a court of inquiry that convened in 1879 and, after hearing testimony from dozens of witnesses over 100 days, found that Sheridan's relief of Warren had been unjustified. On November 21, 1881 President Chester Alan Arthur directed that the findings be published; no other action was taken. [13] Unfortunately for Warren, these results were not published until after his death. Warren's last assignment in the Army was as district engineer for Newport, Rhode Island, where he died of complications from diabetes on August 8, 1882. [15] He was buried in the Island Cemetery in Newport in civilian clothes and without military honors at his own request.

His last words were, The flag! A bronze statue of Warren stands on Little Round Top in Gettysburg National Military Park. It was created by Karl Gerhardt (18531940) and dedicated in 1888.

[17] Another bronze statue, by Henry Baerer (18371908), was erected in the Grand Army Plaza, Brooklyn, New York. It depicts Warren standing in uniform, with field binoculars on a granite pedestal, made of stone quarried at Little Round Top. Reflecting a pattern of naming many Washington, DC streets in newly developed areas in the Capital after Civil War generals, an eastwest street in the Northwest quadrant is named Warren Street, NW.

Warren Prize is awarded approximately every four years by the National Academy of Sciences. It is funded by a gift from his daughter, Miss Emily B.

Warren, in memory of her father. The item "Civil War CDV Union General Gouverneur Warren V Corps by Brady" is in sale since Monday, December 28, 2020. This item is in the category "Collectibles\Militaria\Civil War (1861-65)\Original Period Items\Photographs". The seller is "civil_war_photos" and is located in Midland, Michigan. This item can be shipped worldwide.