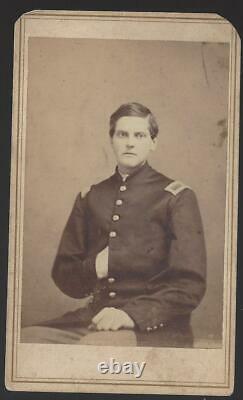 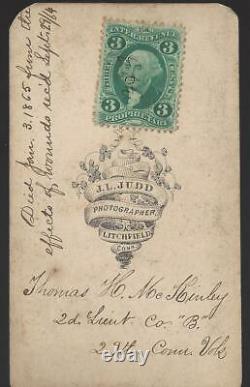 11/61-1/64 with the 1st CVHA, promoted Lt in the 29th CV 1/1/64 died of wounds on 1/3/65 received at Richmond VA. Midway through the Civil War, Connecticut created the states first African American regiment, the 29th Regiment Connecticut Volunteers. Fighting bravely for the final year of the war, the regiment won many important battles and became one of the first Union regiments to march through the Confederate capital of Richmond. With its respectable service, the 29th Connecticut demonstrated the merits and justification for racial equality and freedom in Connecticut.

The regiment, established late in 1863, was honorably disbanded in November 1865. Union Belatedly Allows African American Enlistment. The 29th Connecticut had first been recruited when the Union was in difficult times: the first two years of the Civil War had claimed the lives of tens of thousands of Americans, and the Union army was running very short on manpower. A military draft soon became necessary and proved incredibly unpopular; yet, there were thousands of African American men who were eager to fight but not allowed to serve because of their race.

In late 1862 the United States government finally allowed African Americans to enlist, but only in separate black regiments. Throughout the war, President Abraham Lincoln depended on individual Union states to recruit regiments and send them to the battlefield. Each regiment generally had 1,000 men divided into 10 companies. Once African Americans were allowed to serve, Connecticuts governor and legislature decided in November 1863 that the 29th would be a black regiment.

Many white Americans were uncomfortable with the idea of making black regiments, however, and it was determined that white officers would lead the unit. To overcome this prejudice, the 29th Connecticut would have to prove itself on the battlefield. Through the remaining months of 1863, African American men from across the state poured into the training camp in the Fair Haven section of New Haven, and by January 1864 the 29th Regiment Connecticut Volunteers was full. One of the recruits, Alexander Newton, was the son of a slave who longed for an opportunity and the power to play the part of a Moses for his people still in slavery. Newton recorded his time with the 29th Connecticut Volunteers in an autobiography, later published.

Before this new regiment filled, though, an impatient United States government, desperate for troops, took the men and combined them with soldiers from other states to form the 31st Regiment United States Infantry. Meanwhile, the new recruits of the 29th Connecticut spent the next several weeks training in New Haven. In March 1864, the men paraded through the streets of New Haven and, according to soldier J. Hill, white and colored ladies and gentlemen grasped me by the hand, with tears streaming down their cheeksexpressing the hope that we might have a safe return.

Wooster of Derby as the units leader, the men boarded a steamship bound for the South Carolina coast. Sent to Virginia in the summer of 1864, the 29th Connecticut fought many small battles when Union and Confederate armies were locked in a siege between Richmond and Petersburg.

During one of those battles, Newton fearfully remembered a twenty-pound cannon ball coming towards methrough the smoke. It looked like it had been sent especially for me. In September 1864, the 29th Connecticut helped take Fort Harrison, located less than 10 miles from the Confederate capital in Richmond. On October 13, the regiment participated in a scouting mission which led to the Battle of the Darbytown Road, and two weeks later the men pushed the Confederate army back at the Battle of Kell House, which resulted in over 150 casualties and many captured soldiers.

Wartime Service Aids Struggle for Equality. In April 1865, the Confederate line finally broke, and Richmond was evacuated. The 29th took part in the last attacks, which emptied the Confederate defensive trenches, and men of the regiment were among the first Union soldiers to march triumphantly through the streets of Richmond. The war had ended, but the 29th reported for duty, this time in Texas.

Though this prognosis proved to be optimistic, Connecticuts African American troops had indeed moved the cause for equality forward. Todd Jones, a life-long resident of the Nutmeg State, holds a graduate degree in Public History from Central Connecticut State University and is a Historic Preservation Specialist for the US government. National Park Service - Richmond National Battlefield Park. 29th Regiment Connecticut Infantry (Colored), 2017.

The Connecticut 29th Colored Regiment CV Infantry, Inc. 29th Colored Regiment Monument, 2017. Broadside - Twenty-Ninth Regiment, Conn. Muster Roll of Captain James C. Sweetland, Company a, of the Twenty-Ninth Regiment of Conn. Connecticut History Online, Connecticut Historical Society. War Department, Adjutant Generals Office. War Department General Order 143: Creation of the U. A Sketch of the 29th Regiment of Connecticut Colored Troops Giving a Full Account of Its Formation, of All the Battles Through Which It Passed, and Its Final Disbandment.

New York, NY: Baker & Godwin Printers, 1881. Out of the Briars: An Autobiography and Sketch of the Twenty-Ninth Regiment Connecticut Volunteers. The Many Layers to Onion Farming in Westport. Gideon Welles, US Secretary of the Navy and Lincolns Neptune. Unveiling of the Grant Memorial Tablet Today in History: October 4.

Map Rochambeaus Camp at East Hartford. When Old Saybrook Was a College Town. Benjamin Spock: Raising the Worlds Children. The item "Civil War CDV Union Lt Thomas H McKinley 1st CVHA, 29th CV, KIA Richmond VA" is in sale since Friday, August 28, 2020. This item is in the category "Collectibles\Militaria\Civil War (1861-65)\Original Period Items\Photographs". The seller is "civil_war_photos" and is located in Midland, Michigan. This item can be shipped worldwide.