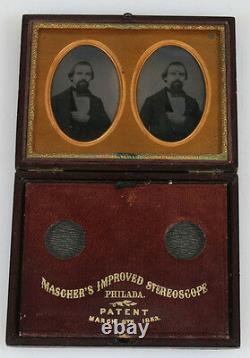 He married Helene Sophie Millinet. The couple had four children. With the start of the Civil War in May of 1861, Charles enlisted in the New York State Militia. His unit, the New York 5th Infantry, was dispatched to Washington during the crisis of early May 1861 and took part in the occupation of Arlington Heights, Virginia after Virginia passed its secession ordinance later that month.

The war and its related events touched Charles and the rest of his family quite directly during the New York Draft Riots of July 1863, when mobs roamed the streets in New York and threatened to torch the Steinway factory building. Charles health began to deteriorate in the fall of 1863, when he suffered from a series of illness and problems.

Finally on March 31, 1865 Charles succumbed to typhoid fever on in Braunschweig, Germany, and he was interred at Green-Wood Cemetery. PLEASE REQUEST AN INVOICE BEFORE PAYING. "AS IS" items are not returnable unless they do not match the item description. "AS IS" items are NOT warranted to be operational or functional.

We do not mark merchandise values below value or mark items as "gifts" - US and International government regulations prohibit such behavior. The item "CIVIL WAR ERA STEREO AMBRO CHARLES GOTTLIEB STEINWAY PIANO RARE. MASCHER CASE" is in sale since Thursday, January 14, 2016. This item is in the category "Collectibles\Photographic Images\Vintage & Antique (Pre-1940)\Ambrotypes".images" and is located in Pittsburgh, Pennsylvania.