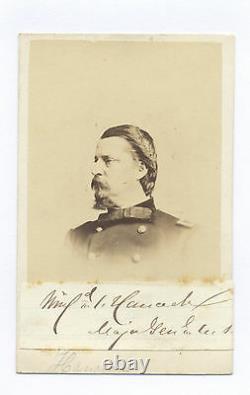 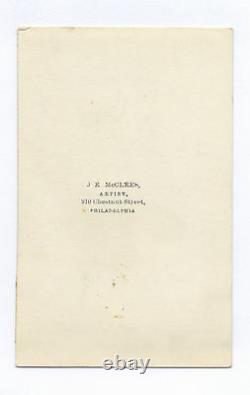 We are offering in this listing one original 1860's Civil War cdv sepia albumen vignette photo of General Winfield Scott Hancock. The photo has attached ink signature with rank Winfd S. The signature which was clipped from a larger piece was affixed, in period, to the front bottom of the photo.

The the outermost curve of flourish in Hancock's signature on the right side & possibly an A. Was clipped off when affixed to the cdv. This is an authentic autograph in the hand of General Winfield Scott Hancock & it is guaranteed entirely original in all respects.

The back has the photographer's marking J. McClees, Artist, 910 Chestnut Street, Philadelphia. This cdv is one part of a 98 piece collection of cdv photos that was formed during the Civil War and slightly after by General George Hampden Crosman & his wife. The Crosman album contained a number of scarce & elusive cdvs of Union generals as well as a number of cdvs of Union generals with original autographs. This cdv measures 4 inches tall by 2 1/2 inches wide.

The front bottom edge of the matt under Hancock's original signature has, in period, penciled "Hancock" identification in an unknown hand. There are some brown age spots around the edges where the signature was affixed.

Hancock was a career U. Army officer and the Democratic nominee for President of the United States in 1880. He served with distinction in the Army for four decades, including service in the Mexican-American War and as a Union general in the American Civil War. Known to his Army colleagues as "Hancock the Superb", he was noted in particular for his personal leadership at the Battle of Gettysburg in 1863.

One military historian wrote, No other Union general at Gettysburg dominated men by the sheer force of their presence more completely than Hancock. His tactical skill had won him the quick admiration of adversaries who had come to know him as the'Thunderbolt of the Army of the Potomac'. His military service continued after the Civil War, as Hancock participated in the military Reconstruction of the South and the Army's presence at the Western frontier.

Hancock's reputation as a war hero at Gettysburg, combined with his rare status as a prominent figure with impeccable Unionist credentials and pro-states' rights views, made him a quadrennial presidential possibility in the years after the Civil War. His noted integrity was a counterpoint to the corruption of the era, for as President Rutherford B. If, when we make up our estimate of a public man, conspicuous both as a soldier and in civil life, we are to think first and chiefly of his manhood, his integrity, his purity, his singleness of purpose, and his unselfish devotion to duty, we can truthfully say of Hancock that he was through and through pure gold. This nationwide popularity led the Democrats to nominate him for President in 1880. Although he ran a strong campaign, Hancock was defeated by Republican James Garfield. The item "GENERAL WINFIELD SCOTT HANCOCK CIVIL WAR SIGNED CDV PHOTO FROM CROSMAN ALBUM" is in sale since Sunday, August 16, 2020. This item is in the category "Collectibles\Photographic Images\Vintage & Antique (Pre-1940)\CDVs". The seller is "imajgin" and is located in Lampeter, Pennsylvania. This item can be shipped to United States.