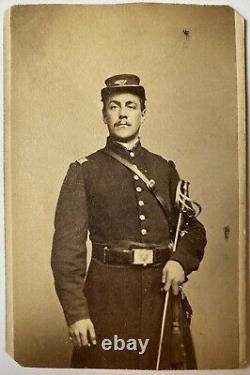 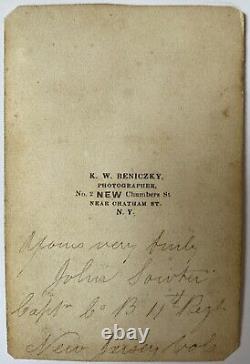 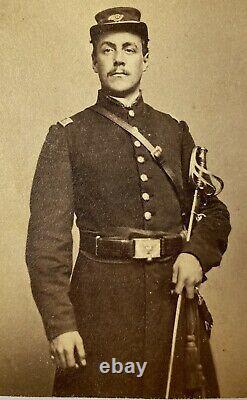 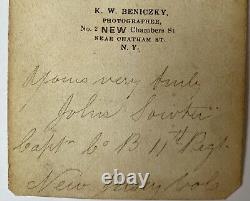 Here is an identified and signed Civil War Era CDV of Captain John Sowter B: c. Sowter, who had been born in England, enlisted in the Union Army on July 1, 1862, and was mustered in that same day as 1.

He was later promoted to 2. Lieutenant on June 2, 1863. He was transferred to Co. B on November 13, 1863, after his promotion to Captain on September 29, 1863. In early July 1864, Sowter was tried for misbehavior in the face of the enemy and absent without leave. He was found guilty on both charges and dismissed from the service on July 11, 1864. Quoted below is Sowters obituary from the Oct. 7, 1880 issue of The Daily Register in Red Bank, NJ: - Death of Capt.

John Sowter, a veteran of the late war, died on Monday night of last week at the Soldiers' Home in Newark. Sowter participated in the battles of Fredericksburg, Chancellorsville, Gettysburg, Port Royal, Snicker's Gap, United States Ford, Mine Run, Locust Grove, and in the entire campaign under Gen.

He was in the Eleventh New Jersey Volunteers, and rose from the ranks to a Captaincy. Sowter was a resident of Red Bank when he enlisted in the army.

At the expiration of the war, he went to Long Branch' and has lived there ever since that time until about a month ago, when he went to the Soldiers' Home. For several years past lie has lived a life of dissipation, from the effects of which his death doubtless resulted. 7, 1880 issue of The Monmouth Inquirer: Capt. John Sowter, died at the New Jersey Soldiers' Home, at Newark, on Monday of last week. He was a veteran of the late war, having served from July 1, 1862, to July 11,1864.

Sleeper's Company (I) of the Eleventh New Jersey Volunteers, and was appointed First Sergeant of the Company July 1, 1862. On the 17th of December of the same year, he was promoted to Second Lieutenant, and was again promoted to First Lieutenant, to succeed Capt. Sleeper, who had been made Captain of Company I. Sept, 29, 1863, the deceased was made Captain of Company B, of the same Regiment.

He left the service July11, 1864, having experienced two years of service in the midst of the war. Sowter participated in the battles, of Fredericksburg, Chancellorsville, Gettysburg, Port Royal, Snicker's Gap, United States Ford, Mine Run, Locust Grove, &c.

At the time of his enlistment Capt. Sowter was a resident of Red Bank.

After his return from the army, he went to England, visiting the place of his birth. After a short stay there he came back to Now Jersey, married a daughter of George W. Houghton, the florist at Long Branch, and settled at that place, becoming interested in the business with his father-in-law. Of late years he has been somewhat dissipated, and a short time ago went to the Soldiers' Home. Please refer to the images in this listing for details regarding the condition of the item.

Offers on any items will be considered so long as they are reasonable. If you have any questions or concerns regarding and item or an order, please contact me. The item "ID'd & Signed Civil War Era CDV of Capt. John Sowter, 11th New Jersey Infantry" is in sale since Tuesday, June 29, 2021.

This item is in the category "Collectibles\Militaria\Civil War (1861-65)\Original Period Items\Photographs". The seller is "history-major" and is located in Grand Junction, Colorado. This item can be shipped to United States.