Identified Civil War Soldier Ohio CDV. States which battle he was killed in 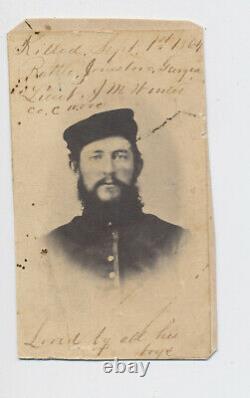 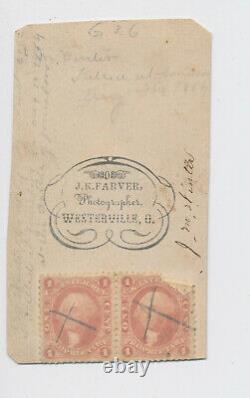 Fantastic identified Civil War Soldier CDV. On the front it says Killed Sept. 1st, 1864 Battle Jonesboro, Georgia. " At the bottom of the photo "Loved by all his?? The photographer is J K Farver of Westerville, O.

There is additional writing on the back in pencil that is difficult to make out. His name is written again in ink on the back. The pencil dates on the back say August. The Battle at Jonesboro was August 31 - September 1, 1864.

This photo has been trimmed on the edges and measures 2.125" x 3.75". Here is some additional information on the Battle of Jonesboro. Photo is in good condition with spotting, surface scuffs, scratches and edge wear with some discoloration expected for age. Please see photos for details.

PLEASE NOTE: This photo has been scanned to show as much detail as possible. Some of those details are not easily visible with the naked eye. Photos this old often have spotting, scuffs, edge wear and discoloration. Please view all photos to view any flaws. Feel free to ask questions.

Information below was shared with me by deovindice. Winter was born in Washington County, Pennsylvania on December 26, 1836 to parents Isaac and Elizabeth Winter. 1 He had a younger brother named Winfield, and an older sister named Mary Catherine, who was the first woman to graduate from Otterbein College, and who married famous Westerville native Benjamin Hanby. 2 From their roots in Pennsylvania, the Winter family moved to Ohio and settled in Licking County, where Jacobs grandfather, whose name was also Jacob, was a minister who wrote numerous articles about the churches of Licking County.

3 Before Jacob enlisted in the Union Army, he was a carpenter and a joiner, two very handy crafts to be adept at while working on rural farms in Ohio. 4 When the Civil War broke out, Jacob enlisted in the service on October 16, 1861 at the age of twenty-three. He was first assigned to the 46th Ohio Voluntary Infantry Regimental Band, where he was a musician and served for three years (his instrument is not listed).

But, the band was mustered out on August 27, 1862 at Memphis, Tennessee by order of the War Department. 5 After the band was mustered out, Jacob was assigned to Company C of the 10th Ohio Voluntary Cavalry on November 12, 1862 at the age of twenty-six. Shortly after joining the 10th OVC, Jacob was appointed to sergeant on November 23, 1862. From there, he made his way up the ranks quickly, being appointed to 1st Sergeant on March 1, 1864, and then again to 2nd Lieutenant on June 16 of the same year. 6 Unfortunately, Jacob only served in the 10th OVC for three years, as he was killed in the line of duty at the battle of Jonesborough in Georgia on August 20, 1864.7 However, the battle of Jonesborough did not start until August 31, so perhaps his death date is inaccurate.

In any event, his body was discovered by his brother Winfield, who was also assigned to Company C in the 10th OVC. The item "Identified Civil War Soldier Ohio CDV. States which battle he was killed in" is in sale since Friday, August 20, 2021.

This item is in the category "Collectibles\Militaria\Civil War (1861-65)\Original Period Items\Photographs". The seller is "annelidel" and is located in Ranchos de Taos, New Mexico. This item can be shipped to United States.