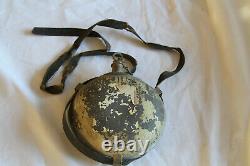 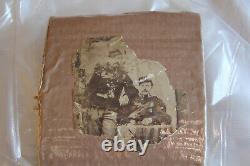 I inherited this canteen, so little is known of its history, but it appears to be a New York Depot canteen complete with chain, stopper/cork and strap, with all three sling keepers intact. Strap is broken in one spot, frayed in several others, and in fair to poor condition. Paint/finish on the canteen has flaked off in many spots and canteen has a dent in the center on one side, the other side looks smooth. A photo had been attached to the front, of which some remnants can still be seen, but has come off and is included as part of the package.

I've not been able to gather much info from the photo other than the fact that the two gentlemen in it appear to be union privates, and presumably one was the owner of the canteen, but there's no way to know for certain that I can tell. Photo has been vacuum sealed in plastic with a piece of cardboard to preserve it. If you would like any more photos or have any other questions (or think I've gotten some of the info on this incorrect), please ask! The item "Original civil war canteen New York Depot plus photo" is in sale since Sunday, September 13, 2020.

This item is in the category "Collectibles\Militaria\Civil War (1861-65)\Original Period Items\Other Civil War Original Items". The seller is "mrem10538" and is located in Richmond, Massachusetts. This item can be shipped to United States.