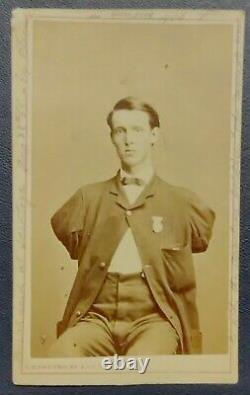 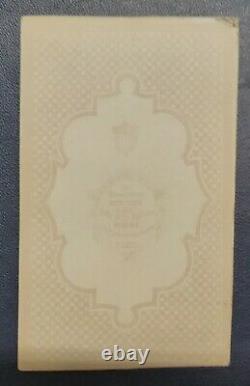 Submitted for your consideration is a Civil War CDV, aka carte-de-visite, of a wounded soldier with some sort of medal pinned to his breast. Private Alfred A Stratton lost both arms from solid cannon shot on June 18th of 1864 at Petersburg Virginia. He was promoted to 1st Sergeant for sake of maximizing his pension, and discharged on September 27, 1864.

Alfred Stratton was born in Ellicott NY, sometime between 1844-46? He became a blacksmith prior to the war, then joined the 147th New York Infantry as a substitute for Albert Lass, who had been drafted. After the war he married Julia Elizabeth Johnson, who bore him three (3) children, two of which made it to adulthood. He became a preacher in New York, later moving to Washington DC.

Alfred Stratton died in DC from complications of his wounds at just 29-30 years of age in 1874. He is buried there in Mount Olivet Cemetery. Below is Stratton's Civil War record with the 147th NYVI, as printed in the 1904 New York State Adjutant-General's Report (note the promotion to 1st Sgt is lacking & his age of 18 is suspect; reported to be 17 or 19 in different venues).

Enlisted at Ellicott, to serve three years, and mustered in as private, Co. G, August 19, 1863; wounded in action at Petersburg, Va. Discharged for disability from wounds, September 27, 1864. I must presume the writer wrote this in the year of 1866. This CDV has a backmark of C.

Fredricks & Co, 587 Broadway, New York / 31 Cubana / Calle de la Habana. / Pass 3e du Havre /. This would be Charles DeForest Fredricks, who at the height of his twenty-year reign, had the largest photographic studio in NYC (1855-75).

He also had studios in Paris and Cuba. Fredricks' life is a fascinating story unto itself. He accordingly photographed John Wilkes Booth several times at this NYC studio. The two links below tell Fredricks' story, should anyone care to check them out. Pics don't do justice to this CDV, especially the backmark, which is a tad light, but not as light as represented here.

Scanner on the fritz, so I had to resort to cheapo Android camera. Obverse image is also sharper than represented by pic.

FYI I will not be sending any lower offers on this CDV, so get it while it's hot! The item "Civil War CDV Alfred Stratton Double-Amputee 147th NY Infantry wdd Petersburg VA" is in sale since Tuesday, May 25, 2021.

This item is in the category "Collectibles\Militaria\Civil War (1861-65)\Original Period Items\Photographs". The seller is "acoustic_shadow" and is located in Concord, New Hampshire.