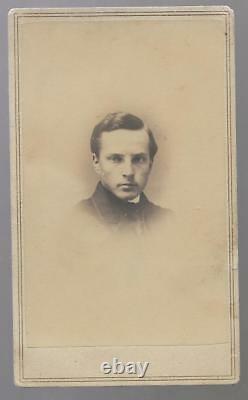 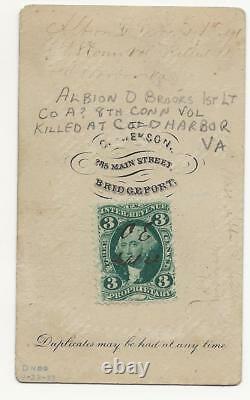 There is no data supporting Albions whereabouts until much later in the 1860 Census when he was living with the Fowler family in Bridgeport following the death of his family. At the time of the census Brooks worked as a machinists apprentice in Bridgeport, most likely with the Fowler family (2). Within a year, at the age of 18, on November 2, 1861, Albion Dennis Brooks enlisted in the Union Army (3).

Brooks regiment, Company A, Connecticut 8th Infantry Regiment, participated in numerous battles throughout the war most famously the Battle of Antietam and Cold Harbor. On June 2, 1864 Albion D. Brooks participated in the Battle of Cold Harbor in Cold Harbor, Virginia. Brooks was wounded in battle on June 2, 1864 and died of the wounds on June 3, 1864 in the Hospital of the 18th Army Corps at age 21 (5). Brooks death was reported by the Bridgeport Republican Standard Issue (June 9, 1864) and the Connecticut, Hale Collection of Cemetery Inscriptions and Newspaper Notices.