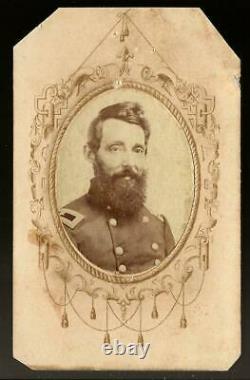 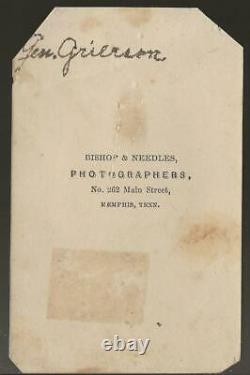 Benjamin Henry Grierson (July 8, 1826 August 31, 1911) was a music teacher, then a career officer in the United States Army. He was a cavalry general in the volunteer Union Army during the Civil War and later led troops in the American Old West. He is most noted for Grierson's Raid, an 1863 expedition through Confederate-held territory that severed enemy communication lines between Vicksburg, Mississippi and Confederate commanders in the Eastern Theater.

After the war he organized and led the Buffalo Soldiers of the 10th Cavalry Regiment from 1866 to 1890. Postbellum service in the West. Grierson's house in Jacksonville. Grierson was born in the borough of Allegheny, Pennsylvania, today a section of Pittsburgh.

He was the youngest of five siblings. Grierson became afraid of horses when, at age eight, he was kicked and nearly killed by a horse, after which he hated horses. He eventually became a great cavalry commander. In 1851, he became a music teacher and band leader in Jacksonville, Illinois.

He married Alice Kirk of Youngstown, Ohio on September 24, 1854. The couple had seven children, four of whom survived to adulthood. With the outbreak of the Civil War, Grierson enlisted as a volunteer aide-de-camp to Maj. Promoted to major on October 24, 1861, he joined the 6th Illinois Cavalry and was promoted to Colonel of that regiment on April 13, 1862. His regiment was engaged in a number of small skirmishes and raids on railroads and facilities in Tennessee and Mississippi that spring and summer. In November, he became a brigade commander in the Cavalry Division of the Army of the Tennessee. In December, he participated in the pursuit of Confederate Earl Van Dorn after his Holly Springs raid against the supply lines of General Ulysses S.

Union Cavalry Colonel Benjamin H. Grierson (seated with hand resting on chin) and staff. In the spring of 1863, he led Grierson's Raid, a major diversionary thrust deep into the Confederacy, ordered by Grant as part of his Vicksburg Campaign. [1] Grierson departed from La Grange, Tennessee, on April 17, in command of 1,700 men of the 6th and 7th Illinois and the 2nd Iowa Cavalry regiments.

Over 17 days, his command marched 800 miles, repeatedly engaged the Confederates, disabled two railroads, captured many prisoners and horses, and destroyed vast amounts of property, finally ending in Baton Rouge on May 2. Winters in The Civil War in Louisiana (1963) reports that Grierson's raid struck fear in the hearts of the citizens and somewhat demoralized the Confederate forces who failed to stop the move. More importantly, Grierson diverted the attention of the Confederate defenders of Vicksburg away from General Grant's main thrust.

Sherman considered Grierson's raid the most brilliant expedition of the war. Grierson was promoted to brigadier general of volunteers in June. While ending his raid in Louisiana he was able to take part in Nathaniel P.

Banks' siege of Port Hudson as commander of the XIX Corps cavalry. He was still in division command during Samuel D. Sturgis' ill-fated encounter with Nathan B. Forrest at the Battle of Brice's Crossroads. Shortly after that battle Grierson was transferred to command the Cavalry in the District of West Tennessee.

He was attached to Andrew J. Smith's XVI Corps and fared much better against Forrest at the Battle of Tupelo. Between December 21, 1864, and January 5, 1865, Grierson led an expedition of two brigades of the Cavalry Division against the Mobile and Ohio Railroad.

On Christmas Day he surprised and captured Forrest's dismounted camp at Verona, Mississippi, and on December 28 engaged a train carrying an ad hoc Confederate force of approximately 1,200 men at Egypt Station, Mississippi, south of Aberdeen, capturing more than 500 troops, including 253 former Union prisoners who had enlisted as "Galvanized Yankees" in the 10th Tennessee. For this expedition Grierson received a brevet promotion to the rank of major general. In the spring of 1865, he took part in Canby's successful campaign to capture Mobile, Alabama.

Grierson decided to pursue a career in the Regular Army after the war, which was unusual for an officer who's only prior military service was as a volunteer officer during the Civil War. His lack of West Point credentials made him suspect to many fellow officers. On 28 July 1866 he was commissioned a colonel in the Regular Army and assigned as the commander of the 10th U.

Cavalry, one of two mounted regiments composed of black enlisted men and white officers, called the Buffalo Soldiers. This assignment also made him unpopular with other officers, including his superior, General Philip Henry Sheridan, because of his support for and trust in his troops.

His sympathy and courtesy to Native American tribes also led to questions about his judgment. The only White officer who supports the unit is Regimental Commanding Officer Colonel Benjamin Grierson. Ostracized by other officers for his enthusiastic command of the African-American troops, Grierson believes in the abilities, dedication, and record of performance of the Buffalo Soldiers and declines offers to lead at any other post. General Pike offers to relieve Grierson'of this self-imposed exile and have him commanding a real cavalry regiment within a month,' but Grierson refuses. Turner Network Television's documentary, "Buffalo Soldiers".

186972: Selected the site for Camp Wichita, later renamed Fort Sill, Oklahoma, with the 10th Cavalry. Supervised construction and acted as post commander. He angered residents of the Texas frontier with his support of the peace policy on the Kiowa-Comanche Reservation. Saved the life of visiting General William Tecumseh Sherman, during a confrontation with Lone Wolf, principal chief of the Kiowa, over responsibility for an attack on a wagon train near Salt Creek Prairie, Texas. 187374: Superintendent of the Mounted Recruiting Service at St.

188282: Moved his headquarters to Fort Davis, Texas. 188383: Commanded the Department of Texas in September and October. 188586: Transferred to Arizona, commanded Whipple Barracks and later Fort Grant. 188688: Commanded the District of New Mexico. There he dealt sympathetically and effectively with problems on the Jicarilla and Navajo reservations.

During his life, he had homes in Jacksonville, Illinois, Fort Concho, and a summer home at Omena, Michigan. In 1907 he suffered a debilitating stroke; he died on August 31, 1911, in Omena, Leelanau County, Michigan. He is buried in Jacksonville East Cemetery in Jacksonville, a town in Morgan County, Illinois. The item "Civil War CDV Union Cavalry General Benjamin Grierson, Famous Raid" is in sale since Monday, June 28, 2021. This item is in the category "Collectibles\Militaria\Civil War (1861-65)\Original Period Items\Photographs".