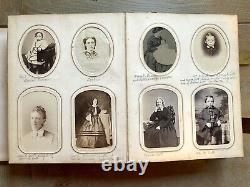 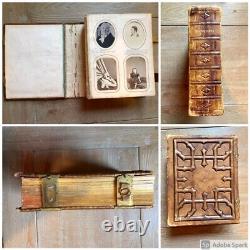 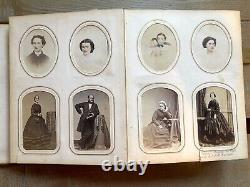 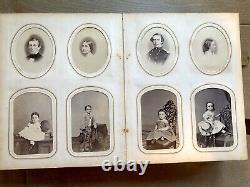 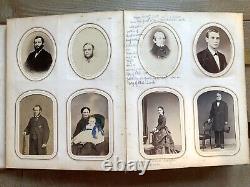 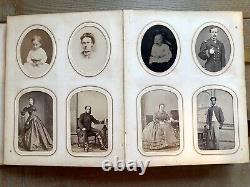 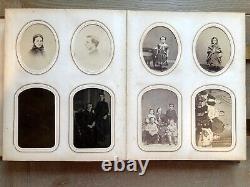 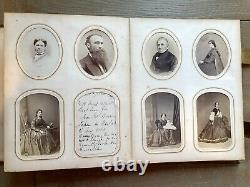 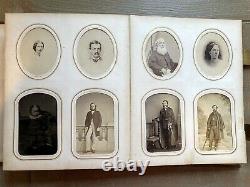 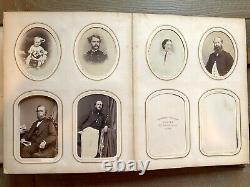 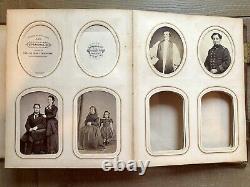 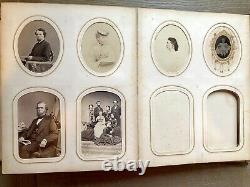 1860s leather album and 165 total images, mostly 1860s CDVs and tintypes, a few later tintypes. I'm guessing there is probably room for 200, but I haven't added up the total slots. Most of the ID's seem to be members of the Barrow family.

I did not check the backs of all of them, but I did see New York, Philadelphia, Boston studios.. I think I even saw a Barbados. Some of the CDVs have additional writing on the backs. I noticed that one CDV is of an older man identified as Robert Scott, who the note states volunteered as a soldier in the Mexican War and received a sword from the city of Philadelphia for gallantry in action..

The photos look nice as they are displayed inside of the album, though please be aware that many are trimmed. As is common in this style of album. Ot sure how many or what percentage are trimmed since I did not check the majority. Album is overall nice with some mostly minor interior damages. Has both of its clasps and displays nice, however the pages have separated from the covers in a solid block. Closed, dimensions are about 9" x 7" x 3. This item is in the category "Collectibles\Photographic Images\Photograph Albums". The seller is "jack_mord" and is located in this country: US. This item can be shipped to United States, Canada, United Kingdom, Denmark, Romania, Slovakia, Bulgaria, Czech Republic, Finland, Hungary, Latvia, Lithuania, Malta, Estonia, Australia, Greece, Portugal, Cyprus, Slovenia, Japan, Sweden, Belgium, France, Hong Kong, Ireland, Netherlands, Poland, Spain, Italy, Germany, Austria, Israel, New Zealand, Switzerland, Norway, Croatia, Republic of, Bermuda, Guernsey, Gibraltar, Iceland, Jersey, Liechtenstein, Luxembourg, Monaco.