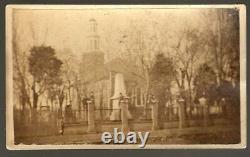 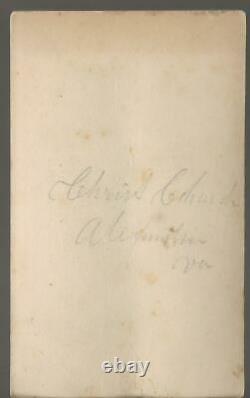 Christ Church is a church located at 118 North Washington Street in Alexandria, Virginia. Constructed as the main church in the Church of England's Fairfax Parish, the building was designed by Col. James Wren, a descendant of Sir Christopher Wren. To finance construction of the church, the Fairfax Vestry raised 31,186 pounds of Oronoco tobacco from parishioners. Construction began in 1765, under the direction of James Parsons. After four years, the church was still unfinished. John Carlyle accepted the position and handed the keys of the completed building over to the vestry in February 1773. Initially the pews were box pews and a two-tier pulpit was situated on the north side of the sanctuary. There was no font because until after the Civil War, weddings, baptisms, and the churching of women took place at home. In the mid-nineteenth century, stoves were put in the back of the church and the box pews were converted to the slips that are in use today.

During a renovation later that century, the original pulpit was replaced by the current wine-glass pulpit. The only remaining hand-carved hymnal rack is in the Lee pew. The plaques on either side of the chancel were hand-lettered by Wren and have never been retouched. They display the Decalogue, the Lord's Prayer, the Apostles' Creed, and the Golden Rule. Wren used ink and then varnished his work just as an artist varnishes a finished painting.

Over time the carbon in the ink and the alcohol in the varnish formed an acetate that created the wonderful burnished patina of the plaques. If you look closely, you can see Wren's brushstrokes and one drip. George Washington, Henry Lee, Robert E.

Lee, Charles Simms, Philip Marsteller, and Henry Fowler are a few of the church's notable parishioners (members). Until the twenty-first century, it was tradition for sitting presidents to attend a service. Franklin Roosevelt, Winston Churchill, and Eleanor Roosevelt visited the church on January 1, 1942 to commemorate World Day of Prayer for Peace. The church was known as Fairfax Church until given the name Christ Church in 1816.

It was declared a National Historic Landmark in 1970. In colonial America, the area around a church was known as the churchyard.

A remote location for burials was known as a graveyard. In 1804, the Alexandria city council banned burials within the city limits due to health concerns related to cholera and other infectious diseases being common in the early years of the 19th century. The City then allocated space for church graveyards south of town, off Wilkes Street, on part of what was known at the time as Spring Garden Farm. This area provided more burial space and located the graveyards down-river from the city water supply. On April 20, 1809 the Christ Church vestry decreed that burials in the churchyard would cease as of May 1, 1809, and that the Warder or Treasurer be authorized to make sale of lots in the new burial ground to any person.

Today, the graveyard is bounded on the east by Douglass Cemetery, on the west by a hearse road and Trinity United Methodist church cemetery, on the south by Wilkes Street, and on the north by the former Orange and Alexandria railroad yard which is now Jamieson Street. There were no public parks in Alexandrias early days and churchyards and graveyards frequently served as picnic grounds with table marker stones serving as picnic tables. This tradition continued with maintenance of family plots and as part of the observance of Decoration or Memorial Day. The earliest burials in the graveyard represented much of the gentry in Alexandria, including the burial of members of the Cooper, Daingerfield, Gilpin, Lawrason, Lee, and Mason families.

During and shortly after the Civil War, the population of the graveyard grew substantially. Burial of cremated ashes continues today. There are many Confederate veterans buried in the graveyard and the churchyard.

The graveyard has not always been maintained as it lovingly is today. In its early years livestock may have been allowed to graze there, accomplishing the dual function of trimming and fertilizing. As its use declined in the 20th century, the graveyard was allowed to grow over with natural vegetation. In the mid-1970s, a committee of parishioners was formed for the upkeep of the graveyard. It has since been maintained in a manner that honors the memories of those buried there.

For many years a service of remembrance has been held there every year on Memorial Day. Major Samuel Cooper, Revolutionary War soldier who fought at Bunker Hill, Trenton, Brandywine, Germantown, Monmouth among other battles, died 1840, age 84. General Samuel Cooper (Major Coopers son), Adjutant and Inspector General U.

Commodore Sydney Smith Lee, Confederate States Navy and brother of Robert E. Lee, died 1869, age 66, and his wife Anna Maria Mason Lee, died 1898. James Murray Mason (died 1871), Confederate envoy, who with John Slidell, passengers on the British merchant vessel Trent, was arrested by the U. Navy in November 1861 on the high seas, causing an international incident between the United States and Britain. It is known to history as the Trent Affair.

The item "Civil War Era CDV Christ Church & Cemetery Alexandria Virginia 1860's" is in sale since Wednesday, March 6, 2019. This item is in the category "Collectibles\Militaria\Civil War (1861-65)\Original Period Items\Photographs". The seller is "civil_war_photos" and is located in Midland, Michigan.