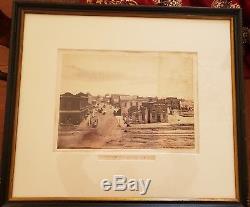 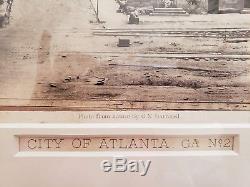 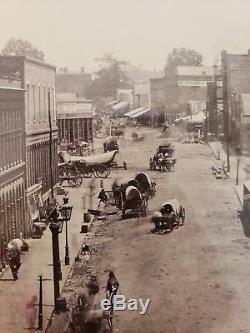 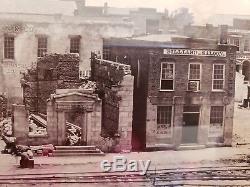 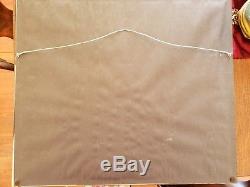 Very Rare Original Civil War Photograph by George N. Entitled: City of Atlanta GA, No. Albumen photograph from a negative taken in 1864, with plate title and photographers credit. Some foxing and discoloration, see pictures. Dimensions: Image approximately 10 x 14 inches; A stunning image from Barnards Photographic Views of Shermans Campaign, an album which is one of the two greatest photographic monuments to the Civil War and a landmark in the history of photography Keith F. A contemporary reviewer wrote of this image and its companions: These photographs surpass any other photographic views which have been produced in this country whether relating to the war or otherwise Harpers Weekly, 8 December, 1866, p.

771 This image comes from George N. Barnards album titled Photographic Views of Shermans Campaign, embracing scenes of the occupation of Nashville, the great battles around Chattanooga and Lookout Mountain, the campaign of Atlanta, March to the Sea, and the Great Raid through the Carolinas (1866).

This album, together with Alexander Gardners Photographic Sketchbook of the Civil War (1866) are the two greatest photographic monuments of the Civil War. Between them, they contain some of the most famous images of the War. Photographic Views of Shermans Campaign is a remarkable work of great symbolic, historic, and artistic power.

It is a result of a complex interweaving of Barnards personal vision, nineteenth-century pictorial conventions, and larger ideas about war and the American landscape. In a series of haunting images the album records the trail of destruction left across the Confederacy by General William T. Shermans army from 1864 to 1865 during his famous March to the Sea: from Nashville to Chattanooga, then Atlanta and to Savannah and the sea, then north to Columbia, South Carolina, and finally, Charleston. The images run chronologically starting with Nashville, and including Mission Ridge, Chattanooga, Resaca, Etawah Bridge, New Hope Church, Kennesaw Mountain, Peach Tree Creek, Atlanta, Savannah, Columbia, Charleston and Fort Sumter. To the North, the military campaign was brilliant, bold and decisive an event worthy of the present monumental album.

To the South, it was vicious, bloody and destructive. After the loss of Vicksburg, Atlanta began to prepare its defense. A circle of forts and earthworks was constructed around the city, about a mile from the center of town. Barnard made a number of photographs of parts of this mammoth effort. In this one, we are confronted with the ruins of Atlanta after Sherman's defeat of the city. This description is copied and modified from a similar original photograph from the same series at worthingtongalleries. I have written 3 Atlanta history books: Inman Park, The Atlanta Exposition, and Atlanta's Ponce de Leon Avenue.

This item is in the category "Collectibles\Militaria\Civil War (1861-65)\Original Period Items\Photographs". The seller is "pollywollypoodle" and is located in Washington, Georgia.