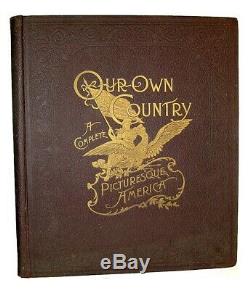 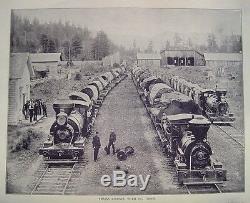 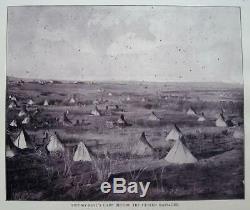 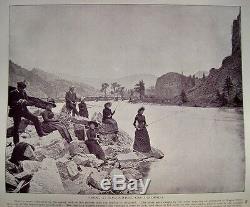 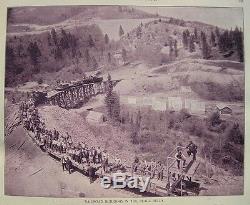 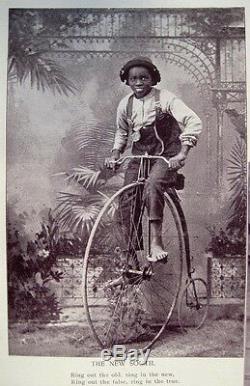 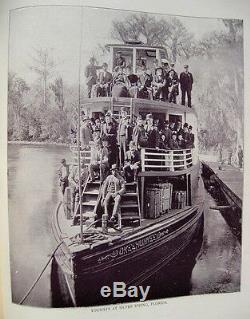 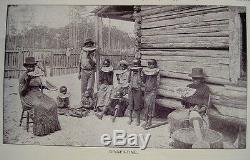 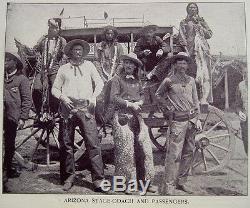 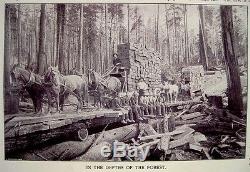 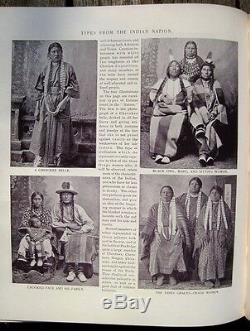 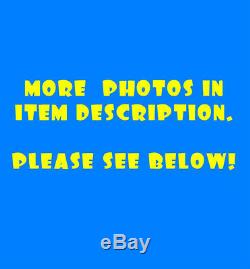 Inner hinges tender but holding. Text is clean and complete.

A nice example of this scarce First Edition photo history of 19th-century America. This book was published in 1894, during the decade when photography and book publishing finally crossed paths. No longer were illustrated view books limited to using engraved images or pen and ink sketches. Instead, the camera made it possible to reproduce bold, black and white vistas on the printed page, bringing the world and all of its wonderful sights right into the sitting rooms of middle-class America.

At the same time this new frontier in publishing was opening up, a very real frontier was being tamed in the the western regions of America. Dreams of gold and silver and a craving for adventure had stirred Americas wanderlust.

The West was the promised land of the 1890s, a realm of raw beauty and infinite potential. An unbridled wilderness there for the taking. The West and everything connected with it seized the American imagination and even to this day has never let go. Pioneer photographers raced westward by rail, every bit as eager as the gold-seekers and homesteaders.

With their big, bulky cameras, they mined the little-known landscapes of California, Colorado, Utah, Arizona, New Mexico and other western states for the visual riches they held. This grand book, OUR OWN COUNTRY, was one of the great volumes published during this important epoch in the history of photography and our nation.

This very scarce first edition was published in 1894. The book contains FIVE HUNDRED ANTIQUE PHOTO VIEWS. Many are reproduced in full-page size for maximum visual impact and the sharpest detail (the photos tend to be a little blurry, but the actual photos are of much finer resolution) and are printed in a sepia-like tint known in the day as royal purple. The photos are accompanied by descriptive captions and an informative text narrative.

What can you expect to find in this amazing collection of antique images? To help you fully appreciate the wonders of this volume, I have personally prepared a detailed summary of the many photos views included in its pages. Youll find my summary directly below. Further down the page, you can see some of these historic images for yourself.

NEW YORK, NEW ENGLAND & EASTERN STATES: Interior of Independence Hall, Philadelphia The William Penn mansion as it stands in Fairmount Park, Philadelphia Blue Ridge Mountain scenery and Virginia Military Institute Monument of Stephen Girard in Girard College Monument to Girard students who died in the war Tomb of General Robert E Lee, Lexington, Virginia Camping in the Catskill Mountains Washingtons headquarters at Valley Forge Camping in the Catskill Mountains Niagara Falls in the wintertime Rapids above Niagara Falls Washington statue, Druid Hill Park, Baltimore Roa Hook, on the Hudson The Obelisk, Central Park, New York Tomb of General Grant, Riverside Park, New York Peekskill Bay and Hudson Narrows, Hudson River Vassar College, Poughkeepsie, New York A lodge in the Adirondacks The bridge at Sleepy Hollow, Tarrytown Grave of Jonathan Edwards, Princeton, New Jersey A Vermont homesteader Washington Elm, now destroyed, Cambridge, Massachusetts The Longfellow Monument, Cambridge, Massachusetts View among the Thousand Islands of the St Lawrence Where John Browns body lies mouldering Harvard College and grounds, Cambridge, Massachusetts Portion of Yale College, New Haven, Connecticut Along the historic road to Concord Statue of Minute Man, Concord Battlefield The historic bridge at Concord, Massachusetts Hawthornes house, Concord, Massachusetts Old New England farmhouse, built in 1636 Burial place of the Stockbridge Indians, near Stockbridge, Massachusetts The Hamilton Statue, Boston John Hancocks house, Boston, Massachusetts Bunker Hill The original Witch House, Salem, Massachusetts Jimmie, the famous fisherman of the Maine coast The Roosevelt Dam U S Army aeroplane and officers Scene in Uncompahgre Valley, Colorado. A Word From the Publisher. OUR OWN COUNTRY will give an insight into the stupendous splendor of the United States. To some it will doubtless be a hint to explore in person what camera and pencil have attempted to depict, while to thousands of others it will simply be a revelation and source of delight. The photographs of natural scenery form the finest collection of American landscape views ever presented to the public.

They possess the charm of nature with no attempt at embellishment. They tell the story of Americas picturesqueness far more graphically than the work of the most skilled artist, and, moreover, they carry with them a conviction of accuracy which is impossible with ideal thoughts and lofty combinations. We are not unmindful of the triumphs of pencil and brush, but for many purposes the camera is king and its products are beyond compare. While it is the special purpose of this great work to accurately and faithfully reproduce and portray the beautiful and sublime natural scenery and wonders of our native land, there will be in addition a faithful endeavor to make it also representative of American character by aid of photographs and descriptions of the home-life and peculiarities of the various people who inhabit the different sections of our country. Thus it will be our aim to reflect, as in a mirror, the once lordly red man of the forest and prairie, who, like Robinson Crusoe, regarded himself as monarch of all he surveyed.

And while thus engaged we shall also secure portraits of the Indians natural enemy, the reckless and unique cowboy, a special product of American life and character. Like the Southern Colonel and the enterprising New Englander, the American cowboy has neither rival nor counterpart.

He is picturesque, daring and gallant. His costume resembles that worn by dwellers in no other nation, and his habits are equally original and unparalleled. In OUR OWN COUNTRY he will be seen as he really exists, and not in the artificial character which is given him in periodicals.

In these pages he will exist forever, indelibly photographed as he lives and moves in real and every-day life. In the broad and beautiful pages of OUR OWN COUNTRY both the Old and the New South will be photographed as they were and are. Then, from the perfumed and restful atmosphere of the South-land, a pleasant and instructive journey will be taken through the mountains and valleys of the Southeastern and Atlantic states.

REMEMBER FOLKS, THIS IS AN 1894 FIRST EDITION. THIS BOOK IS 126 YEARS OLD! Please be sure to add me to your List of Favorite Sellers. Don't miss out on any of my latest listings. NEETMOK BOOKS IS A REGISTERED MEMBER OF EBAYS VERO PROGRAM.

When you prepare your listings you generally should use only material text, photographs, etc. And trademarks/names that you created or own yourself or licensed from the owners.

Item description text; lists of contents, lists of illustrations/photos; scanned images, etc. UNAUTHORIZED USE OF ITEM DESCRIPTION TEXT INCLUDING SUMMARIES OF CONTENTS, ILLUSTRATIONS, ETC. PHOTOS OR OTHER PROPRIETARY INTELLECTUAL PROPERTY IS STRICTLY PROHIBITED AND WILL BE REPORTED TO EBAYS VERO DEPARTMENT FOR IMMEDIATE ACTION.