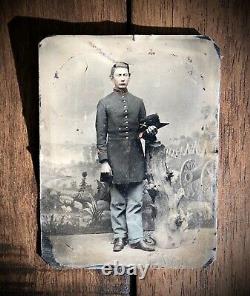 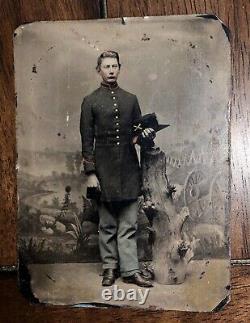 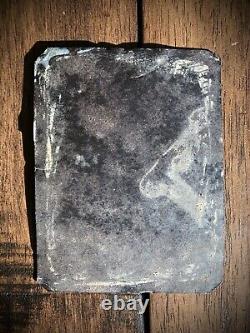 Original tintype of a young Civil War soldier photographed in front of a camp scene backdrop, holding his artilleryman's Hardee Hat. He has tinted blue pants, red piping on his uniform, red cords visible on the front of the hat and a feather plume on its side. The crossed cannon insignia on the front of hat is painted gold, along with the buttons on his uniform. So I believe it's very likely this soldier was a member of 1st Wisconsin Heavy Artillery as well. Tintype is 1/4+, measuring 4" tall 3 1/8" wide.

There are a few light bends that are mostly insignificant, the one by his head by far the worst of them and having a little associated image loss.. Light surface wear and grime, and a very light abrasion from its original mat.