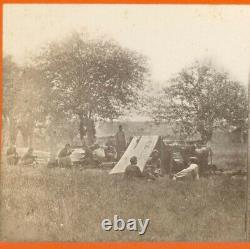 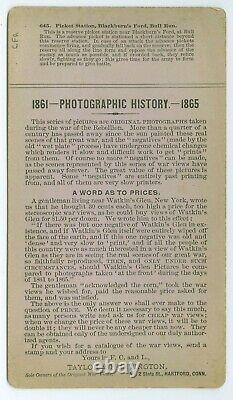 - For Multiple Items, Do Not Pay Until You Request & Receive An Invoice. DESCRIPTION: - Crisp & Clean Original Vintage Stereoview - Shows Union troops at a reserve picket station near Blackburn's Ford near Manassas, Virginia before the 2nd Battle of Bull Run. The soldiers are talking and drinking.

I can see at least one horse saddle to the right of the tent - were these cavalry soldiers? Library of Congress has this image - See Control Number: 2016646714. The LOC attributes this image to Timothy O' Sullivan, Photographer. Picket Station, Blackburn's Ford, Bull Run. This is a reserve picket station near Blackburn's Ford, at Bull Run.

The advance picket is stationed a short distance beyond this reserve station. In case of an attack the advance pickets commence firing, and gradually fall back on the reserve; then the reserve all along the line form and oppose the advance of the enemy as much as possible, and if crowded back, they retire slowly, fighting as they go; this gives time for the army to form and be prepared to give battle. MAKER: - The Library of Congress attributes this image to Timothy O'Sullivan, photographer.

PHOTOGRAPH TYPE: - This is an original vintage photograph - not a modern copy. My Scanner does not do curved stereoviews very well. Please excuse any lighter areas or reflections in the upper image areas. I do my best to describe items accurately and fairly.

This item is in the category "Collectibles\Militaria\Civil War (1861-65)\Original Period Items\Photographs".sherfy" and is located in this country: US. This item can be shipped to United States.