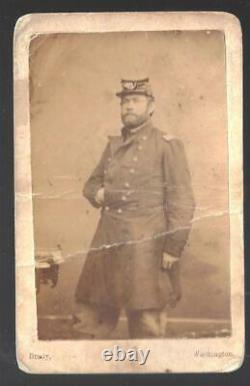 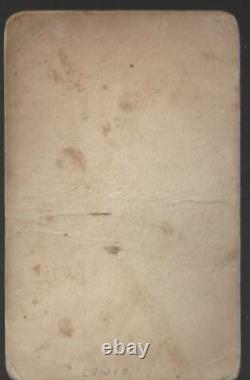 Creased as seen, Brady image. Henry Lutz Cake (October 6, 1827 August 26, 1899) was a Republican member of the U. House of Representatives from Pennsylvania. Cake was born near Northumberland, Pennsylvania. He attended the common and private schools.

He learned the art of printing, and published the Pottsville Mining Record until the American Civil War. Cake entered the Union Army on April 17, 1861, as a second lieutenant, and was elected colonel of the 25th Pennsylvania Infantry Regiment, in Washington, D.

He reorganized the regiment after three months service. He commanded the 96th Pennsylvania Infantry Regiment from September 23, 1861, to March 12, 1863, when he resigned and settled in Tamaqua, Schuylkill County, Pennsylvania. United States House of Representatives. Cake was elected as a Republican to the Fortieth and Forty-first Congresses. He served as chairman of the United States House Committee on Accounts during the Forty-first Congress.

He was an unsuccessful candidate for renomination in 1870. Return to the coal industry. Following his service in the U. LIEUTENANT: I have the honor to submit the following report of the engagements of the 14th and 17th instant so far as participated in by this regiment.

After marching through Jefferson on Sunday morning, I was ordered out upon the road to Burkittsville, the regiment having been indicated as the advance guard. When within 2 miles of the latter village, the cavalry advance came in and reported a skirmish with a superior force of the enemy's cavalry. Companies A and F were deployed at once as skirmishers, and moved forward, the balance of the regiment steadily moving on within easy supporting distance. The enemy retired to the South Mountain through Burkittsville, our two companies of skirmishers penetrating to within 1,000 yards of the base, the balance of the regiment halting at the entrance of the village a little after 1 o'clock p.

As the skirmishers entered the village they drew the fire of the artillery posted on the heights, which was kept up during the day, the shot being divided between the skirmishers and the main body of the Ninety-sixth, drawn up in line of the Knoxville road, the enemy revealing the position of at least five of their pieces. At about 4 o'clock I was ordered to draw in the skirmishers and rejoin the brigade with the regiment. Having posted a picket down the Knoxville road, this required some time, and the brigade had commenced to move, as had also the other two brigades of the division. Receiving an order from Major-General Slocum to move on in the rear of the New Jersey brigade, I did so, forming where they formed and moving on the field to their right. At about 5.30 o'clock the Ninety-sixth had marched to the line of skirmishers, and I was ordered by Colonel Bartlett, commanding the brigade, to take my position on the extreme right.

The base of the mountain was now about 1,000 yards distant. At that point the road ran parallel to the mountain. On one or the other side of this road a substantial stone fence furnished good cover for the enemy's infantry, to say nothing of the woods on the side of the mountain. Brisk musketry firing was in progress on our left, but the good cover in possession of the enemy and the distance at which we stood rendered it quite certain that we could gain nothing at a stand-off fight, while the artillery posted in the mountain was punishing us severely. It was evident that nothing but a rush forward would win.

The order to charge came at last, and with a shout the entire line started. The fields through which the Ninety-sixth charged presented many obstacles, and in order not to meet the enemy with broken lines.

I twice halted momentarily, with a stone fence for a cover, for a great portion of my regiment to form. The last of the series of fields through which we had to charge was meadow and standing corn. As we emerged from the corn the enemy met us with a murderous fire. We were within 20 paces of the road, at the base of the mountain, the stronghold of the enemy. It was here we met our great loss. Shocked, but not repulsed, the men bounded forward, determined to end it with the bayonet. The road was gained in a twinkling, the enemy leaving for the mountain. Those of the enemy who were not hurt, and who seemed too much surprised to get away, begged lustily for mercy.

I had seen Lieutenant John Dougherty, one of my best officers, fall, but without waiting to see who were down or who were up, I hastily formed my line, Major Meginnis, of the Eighteenth New York, promising to form on my left and follow, and dashed on up the hill, keeping the line formed as well as possible, to guard against a probable stand of the enemy at the crest of the hill. I let the men advance nearly as fast as the as they could and wanted to. It was a most exhausting charge.

By the time we had ascended half way the cannon had ceased firing on our left, and the enemy seldom replied to our fire with their muskets. We made captures at every step. After passing the crest of the mountain a lieutenant of the Fifteenth North Carolina delivered himself up, I sent during the charge, 42 prisoners to the rear, including the captain of Company G, Sixteenth Georgia, wounded, and other officers and men most of them unhurt. Sergeant Anderson, of Company K, shot the color-bearer of the Sixteenth Georgia, but did not stop to secure the colors, which were secured by some of our forces afterward. After advancing beyond the crest of the hill, I formed my line for the purpose of resting the men, who were much exhausted by the march of the day and the furious dash up the mountain.

It is with much gratification that I can report my companies all present in line, fully and fairly represented. Colonel Seaver, of the Sixteenth, and also the officers commanding portions of the Eighteenth and Thirty-second New York, joined their lines to the Ninety-sixth, and reported to me for orders. Having thrown our skirmishers to the right and front. I rested until the reception of orders to return to the foot of the mountain and go into camp, which order was promptly obeyed, the brigade going into camp on the western side of the pass. During the charge, and just at the moment when a splendid victory was opened, Major Lewis J. Martin was mortally wounded by a musket-ball in the head, and died while being carried off the field. He was an accomplished and brave soldier; an unassuming and perfect gentleman, beloved by all the regiment, and regretted beyond expression. One of the first to volunteer in the this war, he has at least laid down his life while gallantly and bravely fighting for his country - the only son of his mother, and she a widow. A minute before, First Lieutenant John Dougherty, commanding Company F, was shot through the breast, at my side, while bravely leading his company to the final struggle at the road. Sergeant Casey, seizing his sword as he fell, valiantly raised it over his head and dashed forward at the head of his company, which never faltered. There was no better or braver soldier than Lieutenant John Dougherty. The loss of these two officers falls heavily upon the regiment.

During the charge I had 2 color-bearers killed and 3 wounded. Casualties: 20 killed, 71 wounded; total, 91.

The conduct of the regiment was excellent, my orders under fire being obeyed promptly and with great cheerfulness. Captain Lessing, Company C, deserves especial mention for brave conduct. The prospect of a fight in the wood and among the rocks on the side of the mountain stimulated him to great exertions to gain that point, and he cheered on his fine company most bravely. Captain Hay, Company A, also preserved his excellent reputation as a fighting officer, holding his company well in hand, always cool and in line. His services were invaluable in the fight, as they always are on the march, on picket, or in command of skirmishers. Captain Budd, Company K, also fought gallantly, leading his men bravely in the fight, capturing prisoners with his own hands.

Captain Haas, Company G, also fought with coolness and courage, leading his men into the fire with promptness. Captain Filbert, Boyle, and Royer, of B, D, and H, also did their duty. I must also make special mention of Lieutenant George G.

Boyer, acting regimental adjutant, who bravely encouraged the men throughout the lines up to the time the road was gained. Upon the fall of Major Martin, Lieutenant Boyer was charged with his removal, hoping that prompt attention might save his valuable life. The conduct of Lieutenant Byrnes, commanding Company I, and Lieutenant Oberrender, commanding Company E, was most praiseworthy.

At the head of their companies their courageous example was most conspicuous. Upon the fall of Lieutenant John Dougherty, Sergeant Casey assumed command of Company F, and conducted it through the balance of the day with the coolness of a veteran officer. Lieutenant Sailor, Company A; Lieutenant Hannum, Company D; Lieutenant Russell, Company C, and Lieutenant Huber, Company B, rendered marked services on the field. Lieutenant Russell, Company C, dispatched to bring Company B forward to the regimental line on the side of the mountain, displayed promptness, courage, and zeal in the discharge of his duty. Major John Harlan deserves especial mention for the great coolness he displayed in the fight.

In forming the lines to renew the charge after the enemy had been routed at the foot of the hill his services were invaluable. It is truly gratifying to be able to make this truthful statement. Companies A, F, I, C, K, and G were the first in the road, Companies C, A, and K first and simultaneously. In taking the road we lost 2 color-bearers killed and 3 wounded. The names of those killed with the colors in their hands are Solomon M. Minzi, Company C, color-bearer, and Charles B. The wounded are Thomas Oliver, Company C, color-bearer; Sergeant Johnson, Company H, and William Ortner, Company H. I regret being compelled to report that our surgeons invariably leave upon the bursting of the first shell near the regiment. This has always heretofore deprived us of their services on the field, though I believe it is custom to report for duty at the hospitals after engagements. This regiment would be quite as well off if its surgeons were left at hospitals, Dr. Nugent having been promoted to the One hundred and twenty-sixth. Very respectfully, lieutenant, your obedient servant. On the 17th the regiment moved from camp at daylight and crossed the Antietam at 11 o'clock.

With the balance of the brigade, it was sent to the front to support batteries. While lying in position, a round shot struck in Company G, killing Private Frank Treon and wounding Private McCoy Sargent. I have, happily, no other casualties to record. The item "Civil War CDV Union Colonel Henry L Cake, 25th & 96th Pa Vols" is in sale since Tuesday, October 6, 2020. This item is in the category "Collectibles\Militaria\Civil War (1861-65)\Original Period Items\Photographs".