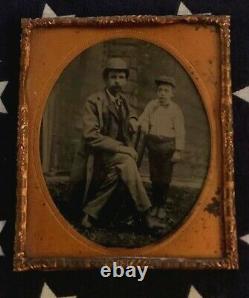 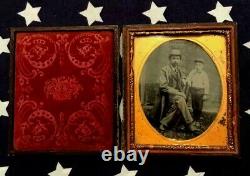 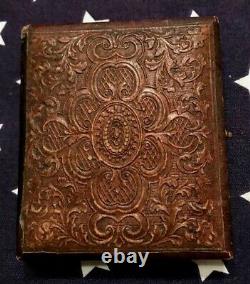 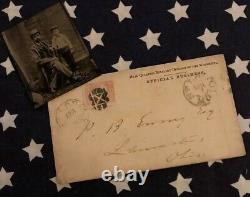 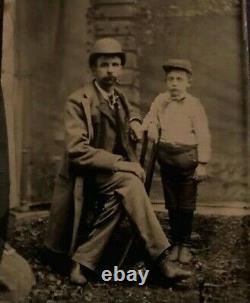 Up for sale is an original tin type image of Willy Sherman taken in the field with photographer. This image came from the estate of Ewing / General Sherman family. Along with the boots listed here, the lot consisted of a hand made wooden sword, an envelope hand written by Sherman to his Brother in law Philemon Ewing, and inside the envelope, a tin type of what was told of being of Willie Sherman taken in the field at Vicksburg while visiting the General.

Willy would sadly die of Typhoid Fever on his way home. While Willy was with his father, he was made an Honorary Sergeant of a Michigan unit, who had grown close to Willy.

They were noted for making him a make shift uniform, and sword at the time. This tintype was found inside a hand written envelope of General William Tecumseh Sherman to his brother in law Philemon Ewing. The tin type was not in a case at the time, which I added later to keep it protected. The image still shows good clarity, with minimal darkening.

The hardened leather case has separated at the hinge, but could easily be repaired. As you can see by the image, they are standing in the field with grass under feet, and a canvas backdrop, very common for the time period, and photographers in the field following the army. Willy is wearing a kepi, and leaning on the chair. The tintype measures 3 1/4" x 2 1/2"s. Also in the images is shown the other items that were with this lot, but not included. You are purchasing the tintype alone. If interested in the complete grouping, please make an offer. Unknown to most people, Sherman faced the ultimate grief in life only months after the Siege of Vicksburg. The story of Sherman is one of military triumph followed by personal tragedy.

In September of 1863, following the victory of the Union army in Vicksburg, Sherman made his camp near Bovina - at a site on the Big Black River His headquarters was a plantation known as Woodburne, the home of Reverend James A. Thinking that it would be a good time to reunite with his family, he sent home for his wife, Ellen, and their four children: Minnie [12], Lizzie [11], Willy [9] and Tom [7]. For the children, it was a wonderful time. They all lived in tents and enjoyed the companionship of the Union soldiers.

Infantry Regiment even made Willy an honorary sergeant. They taught him the manual of arms, and included him in their guard details and formal parades. Willy loved to pretend that he was a real soldier and often accompanied his father on inspection tours of the army.

"I have a healthy camp, ". Sherman wrote to his foster father, Thomas Ewing. And I have no fear of yellow or other fevers. As fate would have it, Sherman spoke too soon. In late September, as the family boarded the steamboat Atlantic to begin their journey back up the Mississippi River and home to Ohio, Sherman noticed that Willy did not look well.

The boy was very quiet and his cheeks were flushed. Roler of the 55th Illinois was consulted and he sadly diagnosed young Willy as having yellow fever. The trip to Memphis could only be described as terrible.

Willy suffered from high fever, diarrhea and other symptoms associated with the illness. The family refused to accept the prognosis and hovered over his bedside. Arriving in Memphis, the semiconscious boy was carried by ambulance to the Gayoso Hotel and seen by the best of physicians. The situation was grim and a Catholic chaplain was summoned to administer the last rites. As Willy floated in and out of consciousness, he realized that he was dying. He told the priest that he was quite willing to die if it was God's will, but that he did not want to leave his father and mother. With this revelation, Ellen and William Sherman began to weep. Willy reached out and caressed their faces then closed his eyes and slipped away. He died at 5 p. For General Sherman, the death of his son was unbearable. Young Willy had been his favorite. First, he blamed himself for bringing the family to Mississippi and exposing them to a camp fever. Next, unable to deal with reality, he slipped into depression. On October 6th, after placing his family on the steamer to return home, Sherman found himself alone at the Gayoso Hotel preparing to return to Vicksburg and the continuation of the war. From the hotel he wrote his wife a letter of total despair: I have got up early this morning to steal a short period in which to write you, but I can hardly trust myself.

Sleeping, waking, every-where I see poor little Willy. His face and form are so deeply imprinted on my memory as were deep seated the hopes I had in his future. Why, oh why, should this child be taken from us, leaving us full of trembling and reproaches?

Several days later, in the midst of a military matter, Sherman wrote to Admiral David Porter saying. I lost recently my little boy by sickness incurred during his visit to my camp on Big Black. He was my pride and hope of life, and his loss has taken from me the great incentive to excel, and now I must work on purely and exclusively for love of country and professional pride. Sherman never ceased to blame himself for the death of his son.

He literally went insane with grief. Historians now consider the fact that Sherman's madness, the burning and killing throughout Mississippi, continuing on to the March to the Sea, was the result of his insurmountable loss. Reflecting on Sherman's cruelties, Margie Bearss, wife of the famous historian, Edwin C.

Did perhaps the death of Willy start a chain reaction of fires and desolation in Mississippi that the winds of more than a century have not entirely hidden? Did Sherman hold Mississippi'that sickly region' responsible for his death?