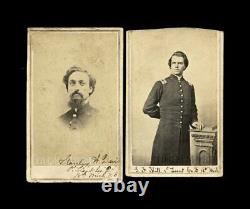 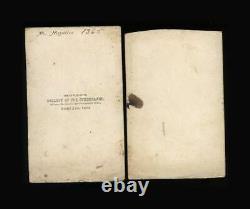 He was wounded and captured on September 23-24 1864 in Athens, AL and released on parole in November 1864. Discharged June 26, 1865 at Nashville, Tennessee. His CDV has Morse's Nashville, TN studio imprint on the back.

Online, I also found the text of a letter Davis wrote in 1864. Scroll to the very bottom of this listing if you want to read it.

It is with painful feelings I have to address you on this un-pleasant business. You have dubtless heard before this of James death as the orderly wrote you immediately.

I have been with the Co. But a short time and did not know James as well as most of the others. Since I have been here I have always known him as a good boy and of the best soldiers in the company. I did not see him after he went to the Post Hospital. He had been there but a few days and none of us thought him dangerous.

The express charges had to be paid in advance. Is very busy now, the Brig. Of Infantry that has been here, left and now we have much more to do than formerly. There is considerable sickness in the Regtment now, more than we had had before in a long time. Several poor boys have died with disease since we've been here.

It is pretty hard for men to come here and be sick and die with disease, but they are just as worthy, just as noble heros as though they had been slain in battle. Only abut eight months ago I lost a darling brother, one whom I truly loved, but he was taken not by disease, but was shot down while doing his duty shot down by those wearing the same uniform of blue, drunken Kentuckeyians. Weather here is very warm has rained almost every day for a week. The item "2 CDV Photos ID'd Civil War Soldiers 18th Michigan Infantry Both POW & WIA" is in sale since Thursday, January 21, 2021.