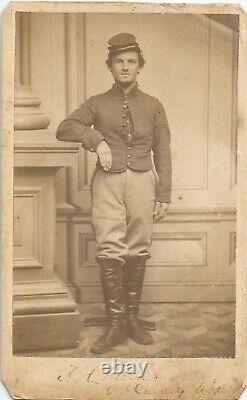 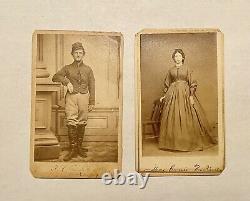 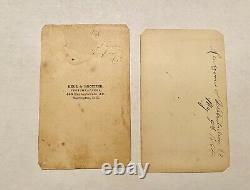 Civil War Soldier CDV Corporal Francis H. Pierce Company L, 6th U. Cavalry and CDV of his wife Carrie. Enlisted: Cleveland, Ohio, as a Private Nov. Wounded: Shot while with his Company located at Camp Emery, east of the Capital. In the month of May 1862. He was being treated for Vulnus. Sclopeticum (a wound caused by a gunshot wound) four months later, 9/62.

Find no record of any action around Camp Emery. May have been an accident? Absent in General Hospital, Washinton D. Sclopeticum (a wound caused by a gunshot).

Records show him in the hospital from 9/62 to 9/63. 6th, 1864, as a Private, honorable expiration of service. Info: Bureau of Pensions; War Department, Adjutant General's Office, Commissioner of.

Pensions; Sworn affidavits for pension requests. The CDV came with another CDV of his Wife, Carrie, and a handful of copies of pension. Requests, affidavits and Bureau of Pensions responses. CDV by BELL & BROTHER, Photographers, 480 Pennsylvania Av. The item "Civil War Soldier CDV Corp Francis H Pierce 6th US Cavalry & CDV of wife Carrie" is in sale since Wednesday, April 21, 2021.

This item is in the category "Collectibles\Militaria\Civil War (1861-65)\Original Period Items\Photographs". The seller is "brittartifacts" and is located in Biglerville, Pennsylvania. This item can be shipped to United States.