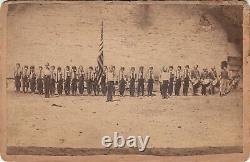 Rare early original vintage Civil War cabinet card photograph shows a group of 28 young zouave fighters at attention. On the far tight are three drummers and a drum major. One of the zouaves in the ranks is holding an American flag.

The Zouaves were a class of light infantry regiments of the French Army serving between 1830 and 1962 and linked to French North Africa, as well as some units of other countries modeled upon them. The zouaves, along with the indigenous Tirailleurs Algeriens, were among the most decorated units of the French Army. Following the outbreak of the U.

Civil War, several units from both Union and Confederate sides adopted the name, appearance, and style of the Zouaves. The Union Armys Zouave regiments numbered over seventy, while the Confederates had about twenty five Zouave companies throughout the conflict. Zouaves were involved in all the major Civil War battles, from the First Manassas to Antietam, and Gettysburg to Appomattox. Zouaves fought in open order formations comprising looser, reactive groups, rather than the close order formations common to other regular infantry units. Acting as light infantry, they were equipped with smaller, lighter, weapons, mostly carbine-style two band muskets.

They were known to be fast and agile, attacking in a rapid advance of 100 to 200 meters, dropping to the ground to load and fire their rifled muskets. Cabinet Card photograph measures 4 1/4 x 6 1/2 inches and is in very good condition with a light bend at right center (see scans).

There are no tears or creases and the image is very sharp and has strong tones with good contrast and clarity. Back is clean with no writing. Or about the equivalent of 6 - 8x10 photographs.

The item "CIVIL WAR ZOUAVE COMPANY OF YOUNG FIGHTERS c. 1860" is in sale since Monday, March 30, 2020. This item is in the category "Collectibles\Militaria\Civil War (1861-65)\Original Period Items\Photographs".

The seller is "kruze3" and is located in Greenbrae, California. This item can be shipped worldwide.