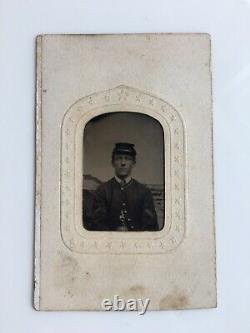 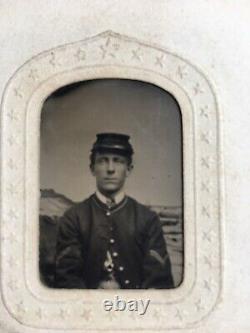 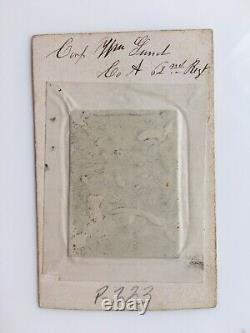 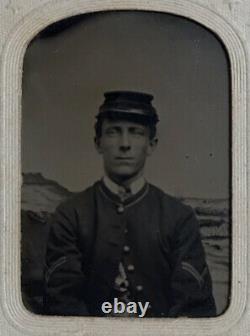 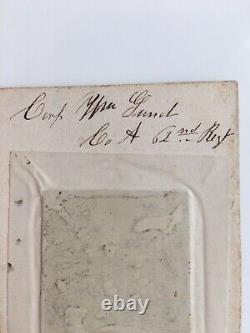 THIS IS A TOP SHELF IMAGE WITH A SOLID INK IDENTIFICATION Please read description and examine photos for condition my late mother acquired this tintype in the early 1990s and it came out of an album of 52 images of 62nd NY Zouave identified soldiers. IMAGE : Is a Tintype, 1860s Identified Civil War Private.

BACKDROP : He is posed in front of a distinctive backdrop that shows up in a number of images of 62nd New York member (and other Sixth Corps soldiers) that depicts a Civil War fortress overlooking a harbor scene. IDENTIFICATION : Very nice period brown ink inscription on the back identifies this soldier as Corp Wm. The 62nd fought in many famous and brutal campaigns and actions of the war. At the end of their 3 year terms they had almost 100% re-enlistment. Three members of the regiment, Edward Browne, James Evans, and Charles E. Moore, were awarded the Congressional Medal of Honor. At Gettysburg, Andersons Zouaves successfully counterattacked against the Confederate advance on Little Round Top, with the rest of their brigade, and recaptured two lost guns in the process, all after a forced march of 32 miles.

A monument honoring the 62nd NY stands north of the Wheat Field Road near Plum Run at the Battlefield of Gettysburg. Company A was recruited almost entirely from French veterans of the Crimean War. As part of a display of their heritage, they selected a uniform that consisted of a complete Algerian Zouave ensemble consisting of a red fez, a dark blue zouave jacket trimmed in red, and baggy red pantaloons fitted into white gaiters. The item "IDENTIFIED 62nd Regt NINTH-PLATE CIVIL WAR TINTYPE CDV UNION SOLDIER, ZOUAV" is in sale since Saturday, May 29, 2021. This item is in the category "Collectibles\Militaria\Civil War (1861-65)\Original Period Items\Photographs".

The seller is "gracefully_aged" and is located in Alpharetta, Georgia. This item can be shipped to United States.