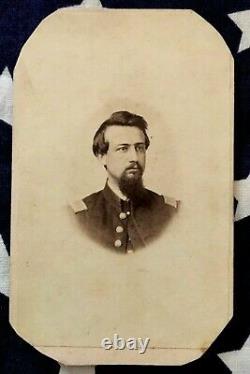 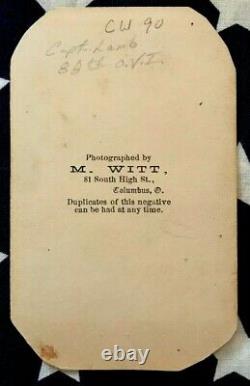 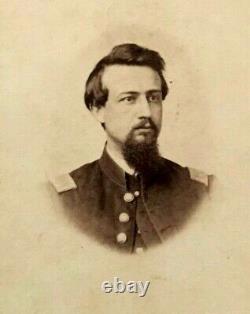 Up for sale is an original Civil War period image of Captain Robert Lamb of the 88th Ohio Infantry Company F. Was the Ohio unit selected to mainly guard the Confederate prisoners at Camp Chase Prison in Columbus, Ohio. Robert Lamb enlisted on 9/24/1862 as a 1st Lieutenant at the age of 29. On 7/29/1863 he mustered in to Company F as Captain. He was discharged on 4/7/1865.

The CDV photo is in good overall condition and still retains good clarity with minimal fading. The corners have been trimmed as seen for placement in a photo album.

The 88th Ohio Infantry was organized at Camp Chase. In July 1862 and mustered in on October 27, 1862, for three years service under Colonel.

In September 1862, the 88th moved to Covington, Kentucky. The regiment served guard duty at Camp Chase until October 1863, and served at Cincinnati, Ohio. The 88th Ohio mustered out of the service at Camp Chase on July 3, 1865.