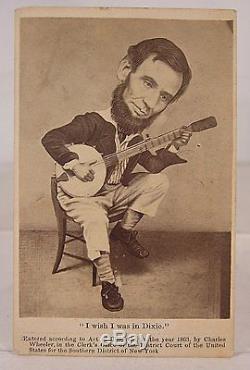 Very rare and fascinating, original, 1863 Albumen CDV Photograph of a Civil War Editorial Cartoon in the style of the Cartoon Lithograph Prints of the period depicting President Abraham Lincoln dressed in a Minstrel Players outfit and playing "I Wish I Was in Dixie" on the banjo. This is decidedly an Ant-Lincoln Cartoon but the interpretation of the Cartoon's meaning has been debated (more about this later). The Image is titled "I Wish I Was in Dixie". This is an albumen Photo measuring approx.

2 3/8" x 3 3/8" and is mounted on its original card mount (overall size of card mount is 2 5/8" x 4"). The mount also carries Wheeler's backmark. This humorous, Anti-Lincoln Cartoon depicts the President wearing a Minstrel Players attire (some have stated that he is wearing a sailors costume) seated on a chair and playing the banjo. It appears that an actual photograph of Lincolns head has been superimposed on the cartoon body with the head being purposely oversized when compared to the body to add to the comic effect. The most accepted interpretation of the Cartoon relates to an incident after the Battle of Antietam.

Lincoln's friend Ward Hill Lamon sang a few of Lincoln's favorite songs to him as they traveled to meet with the troops at Antietam, and the incident was blown out of proportion to suggest Lincoln's indifference to the casualties of the Battle of Antietam. Another interpretation along these lines reads as follows October 4, 1862 Lincoln visited wounded soldiers in the vicinity of Antietam battlefield, including General Israel "Fighting Dick" Richardson who lay dying in a farmhouse. When the President was heard singing ballads on his way to review troops, he was lampooned by the press for making light of the sacrifices of the Battle of Antietam. Others have argued that it is simply a caricature of President Abraham Lincoln published after newspapers reported that Lincolns favorite song was I Wish I Was in Dixie. Another school of thought argues that the Cartoon was a response to the Emancipation Proclamation and was meant to depict Lincoln as either an African American Minstrel Player / "buffoon" or commenting in a derogatory way on his affection for the Slaves.

The Museum of the Confederacy offers another take on the Image comparing this CDV with a southern newspaper version of the same cartoon - The cartoon of Lincoln playing the popular minstrel song I Wish I Was in Dixie on a banjo proved an irresistible subject for northern and southern satirists. But while the carte-de-visite published in New York in 1863 had a wistful feel to it, a wood engraving published in the February 27, 1864 Southern Illustrated News mocked a plaintive Lincoln still determined to conquer the South and win the loyalty of its people with his December 1863 amnesty proposal. This rare and fascinating , Albumen CDV Photograph featuring an anti-Abraham Lincoln Political Cartoon is in excellent condition. The Image exhibits sharp focus, strong contrast and rich tonality. Both the Albumen Photograph and the Card Mount are quite clean and crisp with no physical damage but with some paper adhesion on the reverse.

A very rare and quite wonderful, CDV Composite Anti-Abraham Lincoln Political Cartoon CDV Photograph and a fantastic addition to any collection! The item "1860's CIVIL WAR CDV PHOTO POLITICAL CARTOON ABRAHAM LINCOLN PLAYING THE BANJO" is in sale since Friday, June 17, 2016. This item is in the category "Collectibles\Historical Memorabilia\Political\US\Presidents & First Ladies\1861-65 Abraham Lincoln".

The seller is "walnutts" and is located in Brewster, Massachusetts. This item can be shipped worldwide.