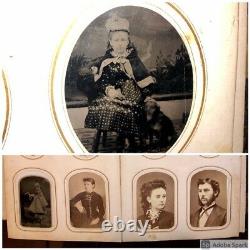 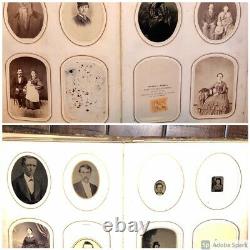 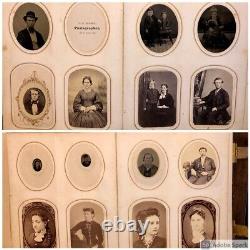 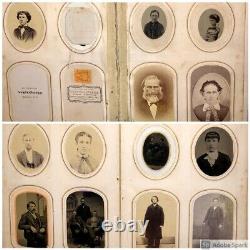 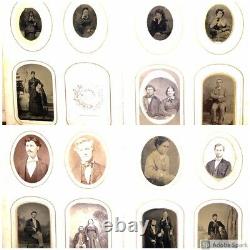 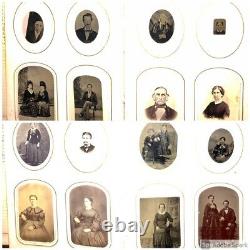 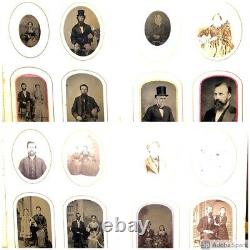 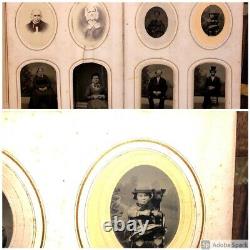 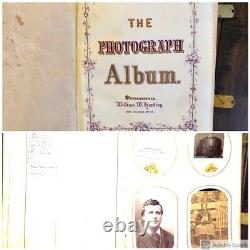 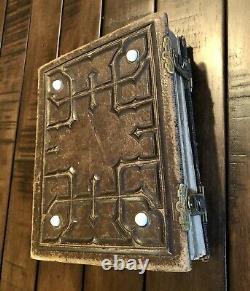 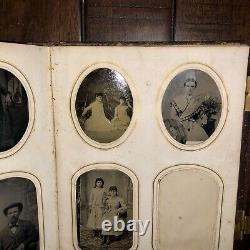 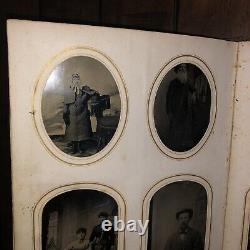 Original 1860s leather photo album (9" tall, 7" wide, 2.5 thick when closed) and 127 photos included, most 1860s and 1870s tintypes and CDVs, with probably a handful of early-1880s. I only slid out and examined about 25% of the photos, but based on the ones I saw, I can tell you the following: These seem to be mostly citizens of Silver Lake, Indiana with roots or family members in Pennsylvania. Almost all of the studio imprints I saw were Silver Lake, or Warsaw, Indiana photos, and one or two Pennsylvania. Another thing I noticed is that most of the photos in the top rows of the album (the round window views) were cropped, some significantly; on the other hand, the images in the bottom rectangular rows were much less likely to be trimmed, I saw several not trimmed at all, and if they were trimmed, the trimming was much less significant than the top row/oval slots. I assume this trend would continue if you removed and checked every single photo, but I don't know.

The album appears complete, though there is some damage, normal page wear, and a section where the pages are partially pulling away from the spine. I counted somewhere between 10 and 20 identified people - some are identified on the album's index page with corresponding numbers written on the pages below their photos, and some with their full names written on the album pages. Could be more ID's on the backs of the ones I didn't check. If you have any questions, please ask before purchasing.

The item "1860s Antique Photo Album Silver Lake Indiana CDV & Tintype Civil War Tax Stamps" is in sale since Sunday, December 20, 2020. This item is in the category "Collectibles\Photographic Images\Vintage & Antique (Pre-1940)\Photo Albums". The seller is "jack_mord" and is located in Woodinville, Washington. This item can be shipped to United States.