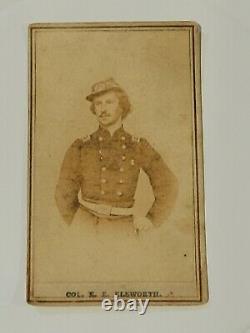 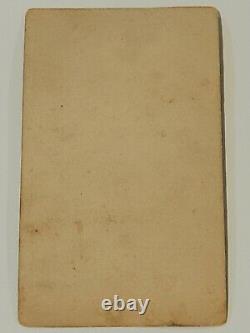 From estate and offered for the first time to the public is this old & original photo CDV of Col. Ellsworth, a close friend of Abraham Lincoln. Ellsworth was the first Casualty of the Civil War being assassinated by the proprietor of the Marshall House in Alexandria Virginia after he hauled the confederate flag down from the roof of the business.

Ellsworth was a member of the 11th New York Volunteer Infantry Regiment. Thanks in advance for your consideration.

Below is the historical events of the event on May 24th 1861 should you like some more info on Col. Ellsworth was killed at the Marshall House on May 24, 1861 the day after Virginia.

S secession was ratified by referendum. During the month before the event, the inn's proprietor, James W. Had raised from the inn's roof a large Confederate flag that President Lincoln and his Cabinet had reportedly observed through field glasses from an elevated spot in Washington. Jackson had reportedly stated that the flag would only be taken down "over his dead body".

Before crossing the Potomac River. To take Alexandria, soldiers serving under Ellsworth's command observed the flag from their camp through field glasses and volunteered to remove it.

Having seen the flag after landing in Alexandria, Ellsworth and seven other soldiers entered the inn through an open door. Once inside, they encountered a man dressed in a shirt and trousers, of whom Ellsworth demanded what sort of a flag it was that hung upon the roof. The man, who seemed greatly alarmed, declared he knew nothing of it, and that he was only a boarder there.

Without questioning him further, Ellsworth sprang up the stairs followed by his soldiers, climbed to the roof on a ladder and cut down the flag with a soldier's knife. The soldiers turned to descend, with Private. Leading the way and Ellsworth following with the flag.

As Brownell reached the first landing place, Jackson jumped from a dark passage, leveled a double-barreled shotgun. At Ellsworth's chest and discharged one barrel directly into Ellsworth's chest, killing him instantly. Jackson then discharged the other barrel at Brownell, but missed his target. Brownell's gun simultaneously shot, hitting Jackson in the middle of his face.

Before Jackson dropped, Brownell repeatedly thrust his bayonet. Through Jackson's body, sending Jackson's corpse down the stairs. Ellsworth became the first Union officer to die in the Civil War.

Brownell, who retained a piece of the flag, was later awarded a Medal of Honor. Lincoln was deeply saddened by his friend's death and ordered an honor guard to bring his friend's body to the White House.

Where he lay in state in the East Room. Ellsworth's body was then taken to the City Hall in New York City. Where thousands of Union supporters came to see the first man to fall for the Union. Ellsworth was then buried in his hometown of Mechanicville, in the Hudson View Cemetery. Thousands of Union supporters rallied around Ellsworth's cause and enlisted. "Remember Ellsworth" became a patriotic slogan. The 44th New York Volunteer Infantry Regiment. Called itself the "Ellsworth Avengers" as well as "The People's Ellsworth Regiment".

Simultaneously, Jackson became a celebrated martyr for the Confederate cause. A plaque that the Sons of Confederate Veterans.

Placed within a blind arch. Near a corner of a prominent hotel that stood on the former site of the Marshall House commemorated Jackson's role in the affair for many years. The item "1rst Civil War Casualty Col Ellsworth real orig photo CDV Abraham Lincoln Friend" is in sale since Tuesday, August 17, 2021. This item is in the category "Collectibles\Militaria\Civil War (1861-65)\Original Period Items\Photographs". The seller is "letmplay" and is located in West Burlington, Iowa.