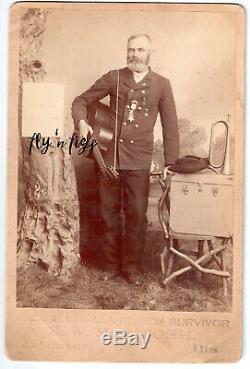 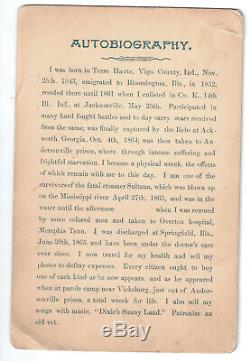 E 14th Illinois Infantry Regiment Civil War. McIntosh was born in Terre Haute, Indiana Nov 25, 1843, emigrated to Bloomington, Illinois in 1852, and enlisted in Co. 14th Illinois Infantry at Jacksonsville, Illinois May 25th. McIntosh participated in 22 battles, was wounded 5 times, captured at Ackworth, Georgia October 4, 1864 and was transported to Andersonville prison. McIntosh weighed 175 pounds when captured; when paroled March 28th, 1865 he weighed 65 pounds and could not walk. Thousands of recently released Union prisoners of war that had been held by the Confederacy at the prison camps of Cahaba and Andersonville had been brought to a small camp outside of Vicksburg to await release to the North. Captain James Mason of the Sultana, a Mississippi River side-wheel steamboat, was approached by Union chief quartermaster at Vicksburg, Reuben Hatch. Hatch suggested that he could guarantee Mason a full load of prisoners if Mason would agree to give him a kickback.

Although Sultana had a legal capacity of only 376, by the time she backed away from Vicksburg on the night of April 24, 1865, she was severely overcrowded with 1,960 paroled prisoners, 22 guards from the 58th Ohio Volunteer Infantry, 70 paying cabin passengers, and 85 crew members, a total of 2,137 people. Many of the paroled prisoners had been weakened by their incarceration in the Confederate prison camps and associated illnesses but had managed to gain some strength while waiting at the parole camp to be officially released.

The men were packed into every available space, and the overflow was so severe that in some places, the decks began to creak and sag and had to be supported with heavy wooden beams. On April 27, 1865, The Sultana boilers exploded, the steamboat burned to the waterline and sank near Memphis, Tennessee. McIntosh was rescued by two black men after being 14 hours in the water. The exact death toll is unknown, although the most recent evidence indicates 1,168.

On May 19, 1865, less than a month after the disaster, Brig. William Hoffman, Commissary General of Prisoners, who investigated the disaster, reported an overall loss of soldiers, passengers, and crew of 1,238. The Sultana disaster was overshadowed in the press by events surrounding the end of the American Civil War, including the killing of President Lincoln's assassin John Wilkes Booth just the day before, no one was ever held accountable for the tragedy. Original antique cabinet photo: 6.5 x 4.25 inches. Bend to cabinet mount on 3 corners.

Verso print out excellent clarity. Image contrast and clarity very good. Watermark: fly'n figs does not appear on actual photo. The item "ANDERSONVILLE & SULTANA SURVIVOR E. McINTOSH original cabinet photo CIVIL WAR" is in sale since Monday, March 23, 2020. This item is in the category "Collectibles\Militaria\Civil War (1861-65)\Original Period Items\Photographs". The seller is "ktwayne" and is located in Milton, Florida. This item can be shipped to United States.