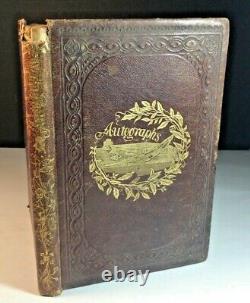 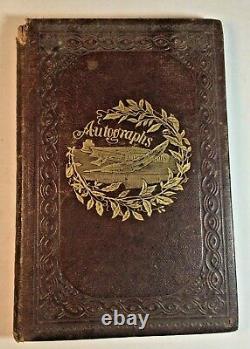 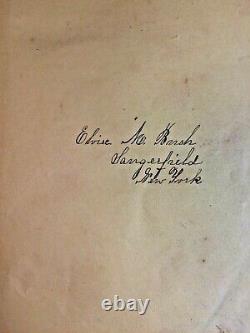 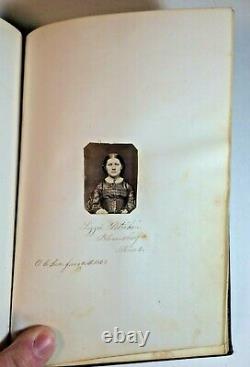 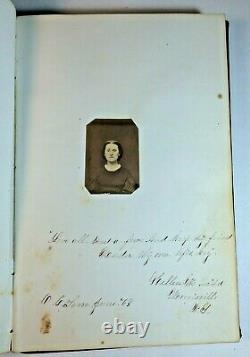 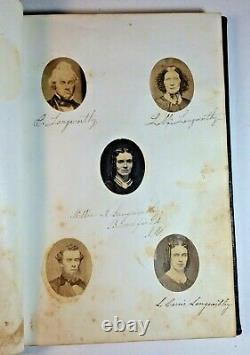 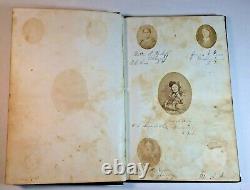 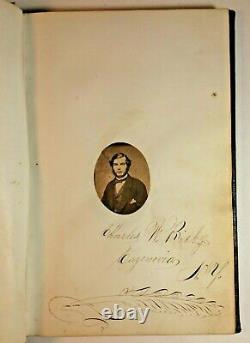 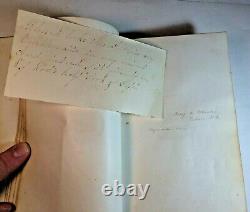 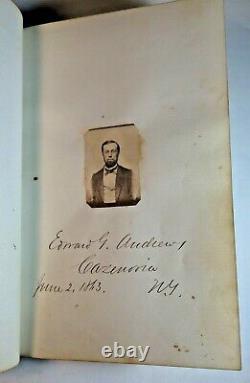 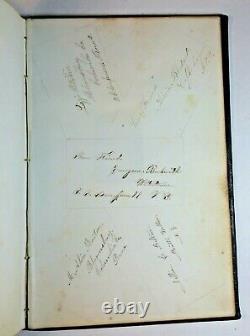 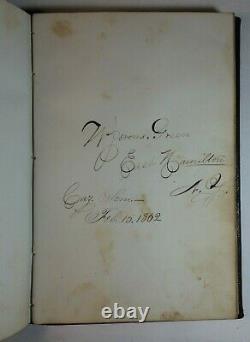 The Album belonged to Eloise M. Barsh of Sangerfield, New York.. It is leather bound with a gold decorated cover, spine lettering and page edges.

It measures 5 1/2'' wide by 8'' long. There are a total of 86 pages with 38 photos. There are many photos of the classmates along with their writings and best wishes. Some of the names are Hattie Wickoff, Jennie Green, Flora Riley, Louise Ryan, Ida Caswell, Della Atwell, Frankie Groff, Charles Bixby, Herbert Parker, S. Andrews, George Jackson, Aaron White, Lizzie Petrickein, W.

There are many cities and towns mentioned as to where these students originated from such as Sangerfeild, N. This is truly a one of a kind early period civil war Cazenovia oc Seminary piece of memorabilia. This belongs in a museum, historical center or someone who traces names for genealogical research. Condition: minor cover wear, pages are tight, some pages show writings are a bit faded, some photos are missing otherwise great condition for the age.

Please view the pics and questions are always welcomed. Some history below on the Fort Edward Institute. Cazenovia College traces its birth to 1824, when it was founded as the Seminary of the Genesee Conference, the second Methodist seminary to be established in the United States.

It opened in what had been the Madison County Courthouse. Although sponsored by the Methodists, the seminary was nonsectarian, and its trustees were a mixture of clergy and laymen. Financial support came not only from church members but also from forward-thinking local residents who recognized the seminarys beneficial effect on employment, the general economy and the cultural life of the village. The communitys continuing interest in the seminary and the College cannot be overestimated.

The seminary was a pioneer in coeducation. From the beginning it welcomed both men and women who wanted to prepare for college or complete their education in Cazenovia. In two years there were 145 students. The buildings housed both men and women, but strong doors divided the two areas.

Distinguished alumni include Jesse Truesdell Peck , a founder and first president of the board of trustees at Syracuse University; Charles Dudley Warner , editor of the Hartford Conn. And close friend of Mark Twain; and Leland Stanford , who founded and endowed Stanford University of California, served as a United States senator and governor of California, and was president of the Central Pacific Railroad. When Americas first transcontinental railroad was completed, it was Stanford who drove the golden spike where the two rail sections joined in Utah. Over the years the seminary changed its name several times, first to the Seminary of the Genesee and Oneida conferences, later to the Oneida Conference Seminary, then to the Central New York Conference Seminary. In 1894 it became Cazenovia Seminary.

Between 1904 and 1931 the institution also functioned as a secondary school for young people from the township, an arrangement that ended when Cazenovia Central High School was built. In the 1940s, facing constantly decreasing enrollment, the trustees decided to add a junior college.

This change was not pleasing to the Methodists. They withdrew church sponsorship in 1942 and community leaders stepped in to form a new non-church-related board for Cazenovia Junior College. When the College received accreditation in 1961 from the Middle States Association of Colleges and Schools, it dropped the "Junior" and became Cazenovia College for Women.

In 1982 the trustees voted to return to coeducation, aiming for one-third male enrollment. The Colleges name was shortened. By 1983 there were men back on campus.

In November 1988, the New York State Board of Regents awarded Cazenovia College the right to offer baccalaureate degrees. In May 2019, the State approved a change to the Colleges charter to include graduate programs, the first of which was introduced in June 2019, a Master of Science in Clinical Mental Health Counseling.

The seller is "mossenergy-half" and is located in Oneonta, New York. This item can be shipped to United States.