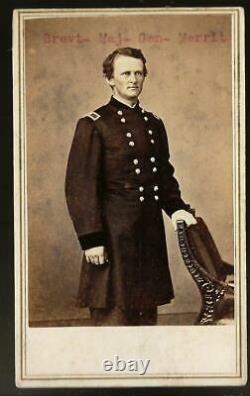 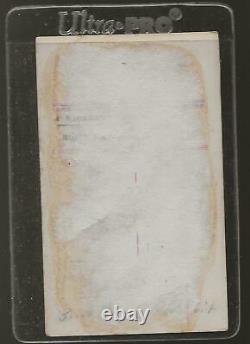 Backmark obscured by previous mounting. Wesley Merritt (June 16, 1836 December 3, 1910)[1] was an American major general who served in the cavalry of the United States Army during the American Civil War, American Indian Wars, SpanishAmerican War, and the PhilippineAmerican War.

Following the latter war, he became the first American Military Governor of the Philippines. Frontier duty and West Point. Merritt was born in New York City. He graduated from the United States Military Academy in 1860 and was commissioned a second lieutenant in the 2nd Dragoons, serving initially in Utah under John Buford. He became the adjutant for the unit when it was renamed the 2nd Cavalry Regiment. Photograph taken sometime between 1864 and 1866. In 1862, Merritt was appointed captain in the 2nd Cavalry and served as an aide-de-camp to Brig. George Cooke, who commanded the Cavalry Department of the Army of the Potomac.

He served in the defenses of Washington, D. For the rest of 1862.

[2] In 1863, he was appointed adjutant for Maj. George Stoneman and participated in Stoneman's Raid in the Battle of Chancellorsville in 1863. In the Gettysburg Campaign, Merritt commanded the Reserve Brigade, 1st Division, Cavalry Corps of the Army of the Potomac. He was slightly wounded in the Battle of Brandy Station; on June 29, 1863, he was appointed brigadier general of volunteers for his "gallant and meritorious service" at Brandy Station and Upperville. Being promoted directly from captain to brigadier general was an unusual step, even for the Civil War, but Merritt shared this honor on that date with Captain Elon J.

Farnsworth[3] and Captain George Armstrong Custer. In the initial cavalry actions of the Battle of Gettysburg, Merritt saw no action; his reserve brigade guarded the lines of communications of the Army of the Potomac.

On July 3, 1863, however, he participated in the assault ordered by division commander Brig. Judson Kilpatrick on the Confederate right flank, following Pickett's Charge.

His fellow general, Elon J. Farnsworth, was killed during this futile assault against infantry troops. Merritt took over command of the 1st Division of the Cavalry Corps following the death by typhoid fever of its commander, John Buford, in December 1863. Alfred Torbert was the initial commander of the 1st Division but was absent ill for most of Lt. Grant's Overland Campaign in 1864, so Merritt acted as commander in his place.

He received a brevet promotion to lieutenant colonel in the regular army for his actions at the Battle of Yellow Tavern, the engagement in which Confederate cavalry commander Maj. Philip Sheridan's Valley Campaigns of 1864, Merritt commanded the 1st Division, Cavalry Corps of the Army of the Shenandoah. Arriving at the opportune moment, his division routed the Confederate forces at the Third Battle of Winchester, a deed for which he received a brevet promotion to major general of the volunteers. [2] Upon his return his Cavalry was deployed across the valley, burning, destroying or taking away everything of value or likely to become of value to the enemy. October 5 his division alone destroyed from Port Republic to Toms Brook 630 barns, 47 mills, 410,742 bushels of wheat, 515 acres of corn not counting private homes.

He was second-in-command to Sheridan during the Appomattox Campaign and was one of several commissioners for the surrender at Appomattox Court House. He was brevetted major general in the regular army, in April 1865, for bravery at the Battle of Five Forks and the Appomattox Campaign. In June 1865, Merritt was appointed command of Cavalry Forces of the Military Division of the Southwest, commanded by Sheridan. He led the 1st Division of Cavalry to march from Shreveport, Louisiana, to San Antonio, Texas, as part of the Union occupation forces on an arduous 33-day 600-mile march between July 9 and August 11, 1865.

After the war's end, Merritt continued to serve in the cavalry along the frontier. He was appointed lieutenant colonel of the newly raised U. 9th Cavalry on July 28, 1866, and in July 1867 was sent to command Fort Davis, Texas, garrisoned by six of the regiment's companies.

He was made colonel of the 5th Cavalry on July 1, 1876, which he commanded in the Battle of Slim Buttes during the Indian Wars. As colonel of the 5th Cavalry, Merritt was a member of the court of inquiry which first sat on January 13, 1879 presided over by Colonel John H. King of the 9th Infantry, which was convened to consider the behavior of Major Marcus A. Reno of the 7th Cavalry at the Battle of the Little Bighorn (June 25 to 26, 1876); which resulted in the death of General George Armstrong Custer and over 200 men of the 7th Cavalry. He served on the frontier until being appointed superintendent of West Point, a post he filled from 1882 to 1887.

In 1887, he was appointed brigadier general in the Regular Army. He was promoted to major general in the U. Merritt was a companion of the Illinois Commandery of the Military Order of the Loyal Legion of the United States.

After Commodore Dewey's Asiatic Squadron destroyed Rear Admiral Patricio Montojo's Spanish Pacific Squadron at the Battle of Manila Bay on May 1, 1898, the United States began to organize ground forces to attack and capture the city of Manila. Merritt was placed in command of the newly created Eighth Army Corps. In June 1898, Merritt and the available troops of the corps departed from San Francisco for the Philippines. When Merritt arrived in Manila, he and Dewey made preparations for the attack on the city. The two intentionally kept Emilio Aguinaldo in the dark about the plans for the attack because the Americans did not want Aguinaldo's forces to end up in control of the city. Merritt and Dewey made arrangements with Governor General Fermín Jáudenes, commander of the Spanish garrison, to surrender the city to the American forces after the latter put up a token resistance. The city fell to the Americans on August 13, 1898, and Merritt became the first American military governor of the Philippines. Merritt was relieved by Major General Elwell Stephen Otis on August 30 to advise the United States delegation in the peace negotiations leading to the Treaty of Paris. Based on his SpanishAmerican War service, Merritt became a member of the Pennsylvania Commandery of the Military Order of Foreign Wars. His first wife was Caroline Warren Merritt, who died on June 12, 1893 at the age of 44. She is buried at West Point Cemetery. Merritt's second wife was Laura Williams Caton, daughter of John D. Caton, [1] whom he met in the late 1890s, when she was in her mid-twenties. General Merritt and Laura Williams were married in London on October 24, 1898. General Merrit retired from the Army in 1900 and died from complications of arteriosclerosis in Natural Bridge, Virginia, at the age of 74, on December 3, 1910. He is buried at West Point Cemetery. The item "Civil War CDV Union Cavalry General Wesley Merritt" is in sale since Saturday, July 3, 2021. This item is in the category "Collectibles\Militaria\Civil War (1861-65)\Original Period Items\Photographs". The seller is "civil_war_photos" and is located in Midland, Michigan. This item can be shipped worldwide.