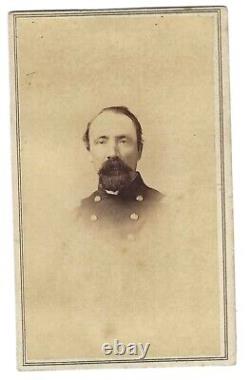 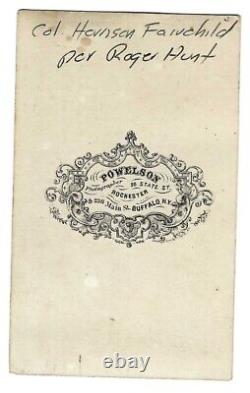 In 1850, he was elected President of the New Bank of Rochester and served in that position until 1854, when he was elected Alderman of the 12th Ward in Rochester. From 1844 to 1854 Fairchild served as an officer in the "Rochester Light Guards, " a part of the New York Militia. In 1854, he was appointed Colonel of the 54th Regiment, New York Militia and held that post until the start of the Civil War. In December 1861, by then age 41, he was commissioned Colonel of the 89th New York Infantry.

He commanded the Brigade in Maryland as senior Colonel. The rest of the War. He was honored by brevet to Brigadier General of Volunteers on 13 March 1865 and mustered out on 3 August 1865 in Richmond, VA. His service from the Adjutant General.

1 His gravesite is on Findagrave. His picture from a photograph in the MOLLUS Massachusetts collection.

01/25/1901; Rochester, NY; burial in Mount Hope Cemetery, Rochester, NY. This item is in the category "Collectibles\Militaria\Civil War (1861-65)\Original Period Items\Photographs". The seller is "civil_war_photos" and is located in this country: US. This item can be shipped worldwide.