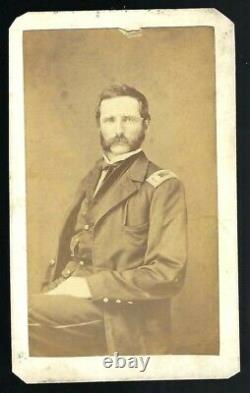 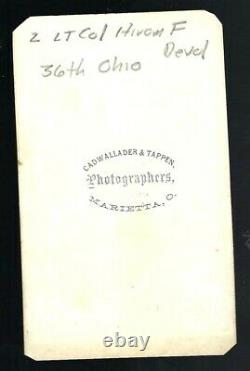 Civil War Union Army Brevet Brigadier General. He served during the Civil War as Colonel and commander of the 36th Ohio Volunteer Infantry. He was brevetted Brigadier General, US Volunteers on March 13, 1865 for "gallant and meritorious services during the war". Waterford, Washington County, Ohio, USA.

12 Nov 1912 (aged 81). Kansas City, Jackson County, Missouri, USA. At age 30, he was commissioned Captain of Company A, 36th Ohio Infantry on 13 August 1861. He led his Company in pushing Confederate skirmishers back across the Lower Bridge on the morning of 16 September 1862.

He was honored by brevet to Brigadier General on 13 March 1865, and mustered out of service on 17 July 1865. In June 1889 he was appointed Collector of Internal Revenue in Kansas City, MO. He had lived there since about 1881. Campaign information from Carman1, who has him as H. Service details from Heitman2 and the Roster3. His photo from a CDV in the collection of the Ohio Historical Society. Personal details from family genealogists. 11/12/1912; Kansas City, MO; burial in Elmwood Cemetery, Kansas City, MO. The Civil War veteran died after a few days' illness.

Practical knowledge of the river and a naturally hardy spirit made his military service of great value - here since 1892. Obituary for Brevet Brigadere General Hiram Fosdick Devol, whose home was located at Tenth and Penn streets.

Details of Devol's life, military service, and death at the age of 80 as a consequence of contracting pneumonia are provided. This item is in the category "Collectibles\Militaria\Civil War (1861-65)\Original Period Items\Photographs". The seller is "civil_war_photos" and is located in this country: US. This item can be shipped worldwide.