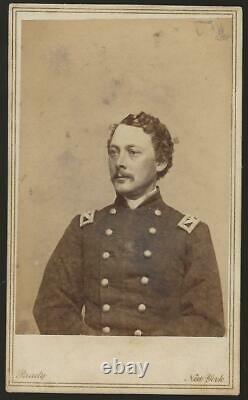 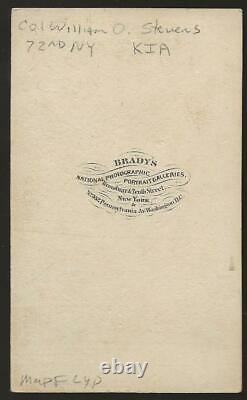 Original period carte de visit of; Civil War Union Army Officer. Born in Belfast, Maine, he was commissioned as Captain and commander of Company D, 72nd New York Volunteer Infantry on June 21, 1861. Promoted to Major in September 1861, he served with the regiment under Colonel Nelson Taylor, and when Taylor was promoted to Brigadier General in September 1862, William O. Stevens was adavanced to Colonel and commander of the 72nd New York.

He ledt the regiment up to the May 1863 Battle of Chancellorsville. There he was killed in action by a gunshot wound in the chest. 72nd New York Infantry Regiment.

From Wikipedia, the free encyclopedia. Jump to navigationJump to search.

Battle of Spotsylvania Court House. The 72nd New York Infantry Regiment was one of five infantry regiments formed by former U. Congressman Daniel Sickles and established as part of the Excelsior Brigade which fought with the Union Army during multiple key engagements of the American Civil War, including the Chancellorsville Campaign in Virginia, the Battle of Gettysburg in Pennsylvania, and the Overland Campaign.

Leaders from the 72nd New York recruited men from New Jersey, as well as from cities and small towns across the State of New York. Congressman Daniel Sickles, under authority of the U. War Department on May 18, 1861, the 72nd New York Infantry was organized at Camp Scott on Staten Island, New York with its members mustering in there from June through November 1861. [1] Listed on its rosters were men from New York City, who were assigned to Companies A, H or K; members of the 68th Militia from Dunkirk, who were assigned to Companies D, E and H; and recruits from Newark, New Jersey, who were assigned to Company F. Companies B, C, G, and I were staffed, respectively, by men from the New York State communities of Jamestown, Vermont, Westfield, and Delhi while Company L was composed of men from Delhi, Plattsburg and Sinclairsville, as well as from Massachusetts and New Jersey.

[2] Commanded initially by Colonel Nelson Taylor, the regiment was awarded its state number on December 11. Part of Sickles' Excelsior Brigade, the 72nd New York participated in many of the war's most significant battles.

The members of this regiment were initially attached to Division of the Potomac (Sickles' Brigade), and assigned to defend the city before participating in the Union Army's expedition to lower Maryland (September 15October 2, 1861). They were then reassigned as Sickles' Brigade to the U. Army of the Potomac in October as part of the division commanded by Brigadier-General Joseph Hooker. Their next significant deployment came as part of the U.

Army's Third Corps, Second Division when they engaged in the Union Army's advance on Manassas, Virginia (March 10, 1862), the expedition from Dumfries to Fredericksburg, capture of stores (March 18), and reconnoissance from Liverpool Point to Stafford Court House and subsequent operations there (April 4). Reassigned to the Peninsula Campaign, they then participated in the Siege of Yorktown, Virginia (April 5May 4, 1862), and incurred heavy casualties in the Battle of Williamsburg (May 5).

By the time that battle was over, nearly 200 members of the regiment had been killed or wounded, a loss rate which the regiment would not experience again for the remainder of the war. Next engaged in the Battle of Seven Pines/Fair Oaks (May 31June 1), the regiment then fought in the Seven Days Battles at Oak Grove (June 25), the Peach Orchard and Savage's Station (June 29), White Oak Swamp and Glendale (June 30), and Malvern Hill (July 1 and August 5). Transferred from the Peninsula during the fall of 1862, the regiment saw heavy action in the Union's Manassas Station Operations (August 2527) and the Second Battle of Bull Run (August 2830). Engaged later that summer in the Union's Northern Virginia Campaign, under the command of Major-General John Pope, and in operations at Fairfax Station and along the Orange and Alexandria Railroad that fall, the 72nd New York received roughly 200 replacement soldiers in December 1862, bringing the regiment's strength to just over 400. It was then ordered into the Battle of Fredericksburg (December 1215), where it remained in the field under arms and without tents for 50 hours before retreating with other Union Army troops. Encamped at Falmouth, Virginia through April 1863, the regiment participated in Major-General Ambrose Burnside's Mud March (January 1863) and in operations at Rappanhannock Brige and Grove Church (February 57) before being ordered on to the Chancellorsville Campaign. During this phase of duty, the 72nd New York lost nearly one-fourth of its members in the intense combat of the Battle of Chancellorsville on May 7, including the regiment's commanding officer, Colonel William O. Stevens, who died the next day after having been mortally wounded and captured by Confederate States Army troops. Daniel Sickles rides past his staff to inspect the front lines of the III Corps at the Peach Orchard salient during the second day of the Battle of Gettysburg (July 2, 1863). Assigned next to the Gettysburg Campaign, the 72nd New York fought in the Battle of Gettysburg under the command of Colonel John Austin.

Positioned near the Emmettsburg Road, the regiment was forced to retreat when the Third Corps was routed from its advance position. By the time the second day's fight was over, Austin and one-third of the regiment had become casualties, as had Sickles, the regiment's founder, whose leg was so badly damaged by a stray cannon ball that it required amputation. When the engagement was over, the regiment was ordered to pursue Confederate troops from Gettysburg into Maryland and Virginia, and re-engaged with the enemy in the battles of Wapping Heights (July 23), Bristoe Station (October 14) and Kelly's Ford (November 7), as well as in the Mine Run Campaign (November 27December 2). After fighting in the battles of the Wilderness (May 57), Spotsylvania Court House (May 821), North Anna (May 2326), Totopotomoy Creek (May 2831), and Cold Harbor (June 112), the regiment also participated in the opening weeks of the Siege of Petersburg until its leaders received orders to begin winding down the regiment's operations.

Company G was then officially mustered out on July 2, followed by Company C on July 20 and Company H on October 31, 1864. Medal of Honor for extraordinary heroism displayed in 1862 during the Battle of Williamsburg, Manassas Station Operations, and Second Battle of Bull Run while serving as a sergeant with the regiment's G Company.

Thomas Horan: Recipient of the U. Medal of Honor after the Battle of Gettysburg. After advancing through the ranks, Stevens was commissioned as colonel on September 8, 1862 and placed in charge of the regiment, a post he held until he was killed in action on May 3, 1863 during the Battle of Chancellorsville, Virginia. Taylor, Nelson: Founder and first commanding officer of the regiment, Tayor was appointed as Brigadier-General of Volunteers, U.

The item "Civil War CDV Union Colonel William O Stevens 72nd NYVI Excelsior Brigade KIA" is in sale since Friday, May 28, 2021. This item is in the category "Collectibles\Militaria\Civil War (1861-65)\Original Period Items\Photographs". The seller is "civil_war_photos" and is located in Midland, Michigan. This item can be shipped worldwide.