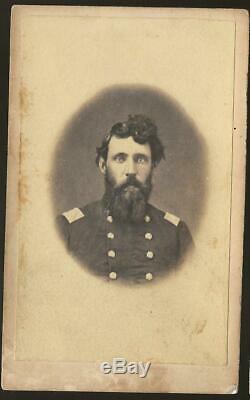 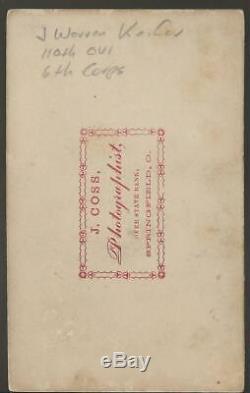 Keifer was born in Clark County, Ohio. While working as a farmer he devoted his spare time to studying law. He began his law practice in Springfield, Ohio on January 12, 1858. He enlisted in the 3rd Ohio Infantry, a three-months regiment, being appointed major. He served in western Virginia fighting in the battles of Rich Mountain and Cheat Mountain and afterward was promoted to lieutenant colonel of the regiment.

When his term expired, he joined the 110th Ohio Infantry and became its colonel. He served in the Eastern Theater leading his regiment at the second battle of Winchester. While the Union army was soundly defeated and most of it surrendered, Keifer's regiment was able to avoid capture. Following the battle of Gettysburg Keifer was assigned to brigade command in the III Corps and fought at the battle of Wapping Heights.

Lee's army had retreated to safety in Virginia, Keifer and his regiment were dispatched to New York City to help suppress the draft riots. He was wounded in the arm at the battle of the Wilderness, putting him out of action for a time.

When he did return to active duty he was placed in command of the 2nd Brigade in James B. Ricketts's 3rd Division of the VI Corps.

He led his brigade at the battles of Winchester and Fisher's Hill. During the battle of Cedar Creek, VI Corps commander Horatio G. Wright temporarily commanded the Army of the Shenandoah and Ricketts temporarily in command of the corps. This put Keifer in command of the 3rd Division in Ricketts's absence. For his service during the Shenandoah Valley Campaign, on December 12, 1864, President Abraham Lincoln nominated Keifer for appointment to the grade of brevet brigadier general of volunteers, to rank from October 19, 1864, and the United States Senate confirmed the appointment on February 14, 1865.

From 1873 until his death, he served as a trustee of Antioch College. In 1876 he was a delegate to the Republican National Convention and the next year went to Congress.

From 1881 to 1883 during the 47th United States Congress, Keifer served as the 34th Speaker of the House of Representatives. During the SpanishAmerican War, President William McKinley appointed Keifer major general of volunteers on June 9, 1898. He commanded the 7th Army Corps and the American forces that marched into Havana after Spanish forces withdrew on Jan. After returning to private life on May 12, 1899, he published Slavery and Four Years of War, in 1900.

The book was both a commentary on the history of slavery in the United States as well as an autobiography of his experiences during the Civil War. He served as the first commander in chief of the United Spanish War Veterans from 1900 to 1901 and in 1903 and 1904 as the Ohio commander of the Loyal Legion. He again ran and was elected to Congress and served from March 4, 1905 March 3, 1911.

After his political career, Keifer again resumed his law practice and served as the president of the Lagonda National Bank in Springfield, Ohio. He died April 22, 1932 at the age of 96 in Springfield, and is buried in Springfield's Ferncliff Cemetery. The item "Civil War CDV Union General J Warren Kiefer 110th Ohio Vols" is in sale since Sunday, June 7, 2020.