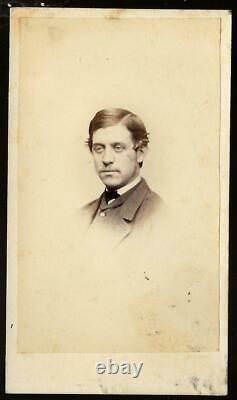 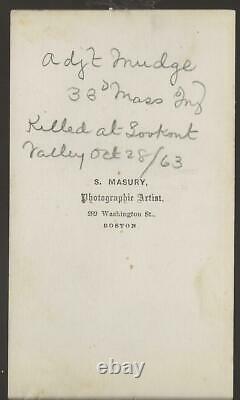 On 8/7/1862 he was commissioned into "H" Co. He was Killed on 10/29/1863 at Wauhatchie, TN. Sources used by Historical Data Systems, Inc. Massachusetts Soldiers, Sailors and Marines in the Civil War.

Photo courtesy of Massachusetts Commandery of MOLLUS. (c) Historical Data Systems, Inc. Was organized at Camp Edwin. Stanton, Lynnfield, in June and July, 1862. A twelve company regiment, and early in August was mustered. Into the service as such with Alberto C. On August 14 the regiment left Camp Stanton for the seat of war.

Companies L and M remained with the. Regiment until November when they were transferred to the 41st. By boat and rail the 33d proceeded to Washington, arriving. Next day the regiment established its camp at. Hunter's Chapel on the Virginia side of the Potomac.

The latter part of the month it did patrol duty at Alexandria. And on October 10 was sent to Fairfax C. Attached to Smith's (2d) Brigade, Von Steinwehr's (2d). Division, Sigel's Corps which later became the 11th.

Movements to Thoroughfare Gap and White Plains in November, the. Regiment went into winter quarters near Falmouth just after the. About April 1, 1863, Col.

In command of the regiment. In May, as a part of Barlow's. Brigade, Von Steinwehr's Division, Howard's (1lth) Corps it was. Present at Chancellorsville with only small loss. Gettysburg,, July 1 to 4, 1863, the 33d was posted on East. Cemetery Hill and later between that and Culp's Hill. This latter position it helped to repel the attack of the. Brigades of Hays and Hoke just at dusk on the 2d of July. This action the regiment lost 8 killed and 38 wounded.

This battle the 33d was encamped for nearly two months in the. Vicinity of Catlett's and Bristoe Stations on the Orange and. Here it received orders to proceed to.

The west, and on the last day of September it detrained at. Both the 11th and 12th Corps had been. Ordered to Tennessee to cooperate with the Army of the. 29, 1863, in a very severe engagement. The 33d lost 35 killed, 58 wounded, and one missing.

Battles of Lookout Mountain and Missionary Ridge the regiment. Went into winter quarters in Lookout Valley. In April, 1864, the 11th and 12th Corps were consolidated. To form the 20th Corps commanded by Gen. As a part of the 3d Brigade, 3d.

Division, 20th Corps, Army of Georgia, the 33d started on its. Famous Atlanta campaign early in May, 1864. At Resaca, May 15, it was heavily engaged, losing 82 men. Of whom 23 were killed or mortally wounded. It was in action, losing 13 killed and 35 wounded, and again at.

Kenesaw Mountain, June 22, losing 8 killed and 18 wounded. Regiment participated in the siege of Atlanta, the occupation. Of the city, the March to the Sea, the operations around.

Savannah, and in the northward march through Georgia and the. Fought March 16, 1865, and. Bentonville, fought March 19, were the last battles of the. When Johnston's army surrendered, April 26, the. 33d Regiment was doing guard duty at Raleigh, N. It then marched back through Petersburg, Richmond, and. To its old Chancellorsville field, thence. And the outskirts of Washington.

Here on the 24th of May it participated in the Grand. Review of Sherman's army. On June 10 the regiment was mustered out of the United.

The regiment were furloughed until July 2, when they were. Assembled for the last time and paid off and discharged. The item "Civil War CDV Union Lt William Prescott Mudge 33rd Mass Vols XI Corps KIA" is in sale since Saturday, January 16, 2021. This item is in the category "Collectibles\Militaria\Civil War (1861-65)\Original Period Items\Photographs". The seller is "civil_war_photos" and is located in Midland, Michigan.