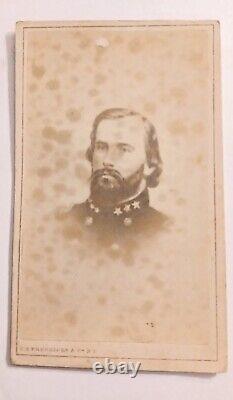 AUTHENTIC CIVIL WAR GENERAL JOHN HUNT MORGAN CDV. Please see photos for condition. In pretty good shape considering it's over 150 years old. The back of the CDV has Morgan written in pencil up at the top and the C. Information and logo on the back.

In April 1862, Morgan raised the 2nd Kentucky Cavalry Regiment (CSA) and fought in the Battle of Shiloh (April 6 to 7, 1862) in Tennessee. He then launched a costly raid in Kentucky. He also attacked the supply lines of Union General William Rosecrans.. In July 1863, he set out on a 1,000-mile (1,600 km) raid into Indiana and Ohio, taking hundreds of prisoners.

But after Union gunboats intercepted most of his men, Morgan surrendered at Salineville, Ohio, following the Battle of Salineville. His point of surrender is the northernmost point ever reached by uniformed Confederates.

The notorious "Morgan's Raid", carried out against orders, gained no tactical advantage for the Confederacy, while the loss of his regiment proved a serious setback. However, some historians, such as Shelby Foote, argue that the raid and the subsequent distraction of Union forces allowed Bragg's Army to escape middle Tennessee un-harassed. Morgan escaped from his Union prison but his credibility remained low, and he was restricted to minor operations. He was killed at Greeneville, Tennessee, in September 1864. Morgan was the brother-in-law of Confederate general A. Fredricks was born in New York City on December 11, 1823. He learned the art of the daguerreotype from Jeremiah Gurney in New York, while he worked as a casemaker for Edward Anthony.

In 1843, at the suggestion of his brother, Fredricks sailed for Angostura, today Ciudad Bolívar, Venezuela. His business took him to Pará, Rio Grande do Sul, Montevideo, Buenos Aires. He enjoyed great success in South America, remaining there until some time in the early 1850s.

Following a brief period in Charleston, South Carolina, Fredricks moved to Paris in 1853. Here he became the first photographer to create life-sized portraits, which artists like Jules-Émile Saintin. Were hired to color using pastel. On his return to New York City, he rejoined Jeremiah Gurney, though it is not clear whether he was initially a partner or an employee.

By 1854, he had developed an early process for enlarging photographs. His partnership with Gurney ended in 1855.

During the latter half of the decade he operated a studio in Havana. Here he received awards for his photographic oil colors and watercolors. During the 1860s he operated a studio on Broadway that was noted for its cartes de visites. In the early 1860s, Charles Fredricks personally photographed John Wilkes Booth (the assassin of President Lincoln) on several occasions at his studio. He retired from photography in 1889 and died in Newark, New Jersey, five years later, on May 25, 1894.

Please check out my other auctions for more great items! What you see listed is exactly what you will receive.

This item is in the category "Collectibles\Militaria\Civil War (1861-65)\Original Period Items\Photographs". The seller is "jenng28" and is located in this country: US. This item can be shipped to United States.