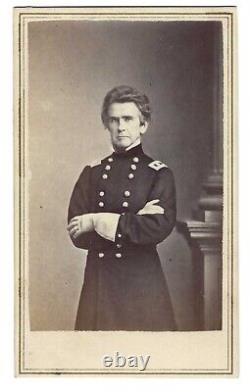 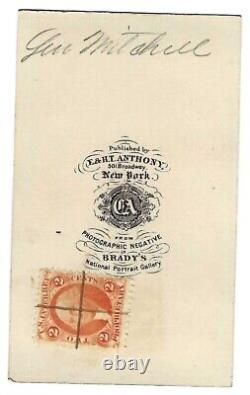 Ormsby MacKnight (or McKnight) Mitchel (August 28, 1810, [1][2] or possibly 1809, [3] - October 31, 1862) was an American astronomer and major general in the American Civil War. A multi-talented man, he was also an attorney, surveyor, professor, and publisher. He is notable for publishing the first magazine in the United States devoted to astronomy. Known in the Union Army as "Old Stars", he is best known for ordering the raid that became famous as the Great Locomotive Chase during the American Civil War. Mitchel was born in Union County, Kentucky, but grew up in Lebanon, Ohio.

He was educated in Lebanon, Ohio and afterward at West Point in 1825, where he was a classmate to Robert E. He graduated in 1829, placing 15th[4][5] out of 46 graduates. Mitchel stayed at West Point as assistant professor of mathematics for three years.

[6] After holding several military positions while studying law, he went to Cincinnati, passed the bar and became an attorney. He also filled the office of Chief Engineer of the Little Miami Railroad, then in process of construction. Subsequently, in 1836, he became assistant professor of mathematics, philosophy, and professor of astronomy at Cincinnati College, and during this incumbency achieved a national renown as an astronomical lecturer and builder of a great observatory (Cincinnati Observatory). He was instrumental in establishing the college's law school, and on his first vacation, surveyed and recommended the route of the planned Little Miami Railroad between Cincinnati and Springfield, Ohio.

Conceiving a desire to possess a fine telescope, he began by striving to awaken interest in the subject of astronomy through a series of lectures. The first was heard by 16 people; but the last was listened to by an enraptured audience of 2,000. His search was long, but successful and, returning, he plunged into the struggle to secure a suitable observatory.

In the person of the eccentric but immensely capable Nicholas Longworth he found a helpful coadjutor. Upon the land which was donated by Longworth located on the summit of Mt. Mitchel began the foundation of his building and John Quincy Adams, then more than 77 years of age, delivered an address at the laying of the cornerstone. The times were hard and the subscriptions came in so slowly that he determined to collect them in person. This "potpourri" of valuables he marketed and turned into cash as best he could.

Nor was this all that the indefatigable professor had to do. The ascent to the place of construction was steep.

These herculean laborers, arduous as they were, constituted but the advocation of the busy man for, all the time, he carried on his classes, teaching five hours a day from eight until one. Each Saturday exhausted his funds and on Monday he had to begin collecting again. But, nothing daunted or discouraged the invincible enthusiast, he stuck resolutely to his task until it was done, and in March 1845 he had the satisfaction of hoisting his telescope into place.

At the time, it was the second-largest refracting telescope in the world. There was no salary attached to the office of astronomer in this new observatory and Mitchel supported himself by civil engineering on the route of the Ohio & Mississippi Railroad (Ohio and Mississippi Railway) and by lecturing anywhere and everywhere. In 1853, he was elected as a member of the American Philosophical Society. For a time, Cincinnati lost his inspirational presence. In 1859, Mitchel accepted the position of astronomer of the Dudley Observatory in Albany, New York (a position which he held until 1861), [6] where he continued his pioneering work on the development of telegraphic determination of longitude. Although, he did not wholly relinquish a connection with the one he had built in Cincinnati. Mitchel helped establish observatories for the United States Navy and Harvard University. He also published, in 1846, the first monthly magazine in the United States devoted specifically to astronomy, the Sidereal Messenger, and other works including The Orbs of Heaven (1848 and later), and Popular Astronomy (1860). When the American Civil War broke out, Mitchel turned soldier. He happened to be in New York when the news of the Battle of Fort Sumter came and, being asked to speak at a public meeting, poured out the deep emotions of his fervid soul in a passionate appeal whose eloquence produced an effect like that of the orations or Demosthenes, Cicero, and Burke. Men and women wept aloud; the cheering drowned his words and the speech he made has been regarded as worthy to be placed alongside abolitionists Abraham Lincoln, Charles Sumner, Wendell Phillips, and Henry Ward Beecher. His previous record and this address procured for Mitchel and high position in the Army and his career as a soldier began. During the American Civil War, he entered the Union Army with a commission as brigadier general of volunteers.

He first organized the northern Kentucky defenses around Cincinnati. He commanded the Department of the Ohio from September to November 1861. During this time, he conspired with espionage agent James J. Andrews on plans to steal a train in Georgia and disrupt a railroad vital to the Confederate States Army coincident with Mitchel's planned attack on Chattanooga, Tennessee. The raid failed, as did Mitchel's military operation.

Andrews and a number of his men were captured. Andrews himself was among eight men who were tried in Chattanooga. They were hanged in Atlanta by Confederate forces, but were later buried in the National Cemetery at Chattanooga in 1887. Although a military failure, the story of Andrew's Raid became known to American history as the Great Locomotive Chase, and has been retold in publications and film. The pursuit of Andrews' Raiders formed the basis of the Buster Keaton silent film The General and a dramatic 1956 Walt Disney film, The Great Locomotive Chase. Further information: Great Locomotive Chase. Mitchel led a division in the Army of the Ohio from December 1861 to July 1862, and was placed in charge of the defense of Nashville, Tennessee, with headquarters in the vicinity of Shelbyville, Tennessee.

He became famous when he seized the city of Huntsville, Alabama in April 1862 without a shot being fired, after he led his troops there from Shelbyville in a surprise maneuver. He was promoted to major general for his efforts. In September 1862, he assumed command of X Corps and the Department of the South at Hilton Head, South Carolina, but died in Beaufort of yellow fever shortly after assuming his post.

He is buried in Green-Wood Cemetery in Brooklyn, New York. This item is in the category "Collectibles\Militaria\Civil War (1861-65)\Original Period Items\Photographs". The seller is "civil_war_photos" and is located in this country: US. This item can be shipped worldwide.