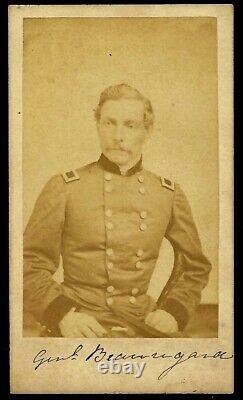 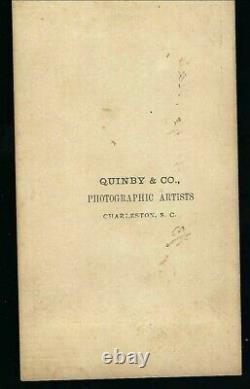 Original Confederate produced view of General PGT. By Quinby and Co Charleston SC. Pierre Gustave Toutant-Beauregard (May 28, 1818 - February 20, 1893) was a Confederate general officer who started the American Civil War by leading the attack on Fort Sumter on April 12, 1861. Today, he is commonly referred to as P.

Beauregard, but he rarely used his first name as an adult. He signed correspondence as G. Trained in military and civil engineering at the U.

Military Academy, West Point, Beauregard served with distinction as an engineer officer in the Mexican-American War. Following a brief appointment as superintendent of the U. Military Academy in 1861, and after Louisiana seceded, he resigned from the United States Army and became the first brigadier general in the Confederate States Army. He commanded the defenses of Charleston, South Carolina, at the start of the Civil War at Fort Sumter on April 12, 1861. Three months later he won the First Battle of Bull Run (First Manassas) near Manassas, Virginia. Beauregard held several key commands in the Western Theater, including control of armies at the Battle of Shiloh in Tennessee, and the Siege of Corinth in northern Mississippi, both in 1862.

He is most known for his defense of the industrial city of Petersburg, Virginia, from Union troops in June 1864, which delayed the eventual fall of the Confederate capital of Richmond, Virginia in April 1865. His influence over Confederate strategy was lessened by his poor professional relationships with President Jefferson Davis and other senior generals and officials.

In April 1865, Beauregard and his commander, General Joseph E. Johnston, convinced Davis and the remaining cabinet members that the war needed to end. Johnston surrendered most of the remaining armies of the Confederacy, including Beauregard and his men, to Major General William Tecumseh Sherman. This item is in the category "Collectibles\Militaria\Civil War (1861-65)\Original Period Items\Photographs".