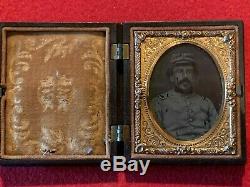 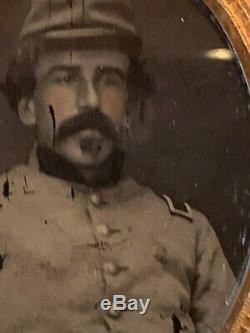 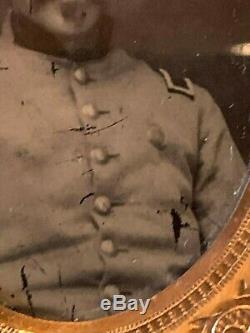 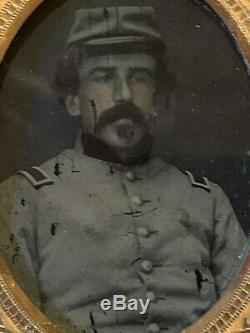 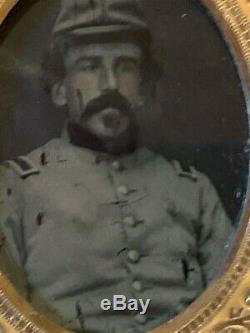 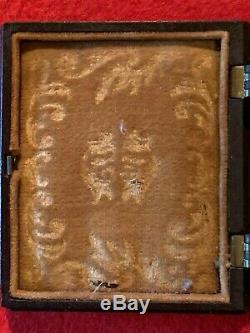 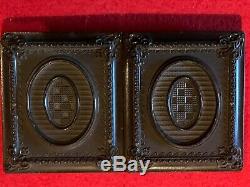 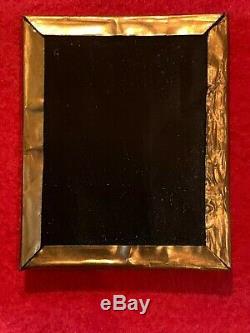 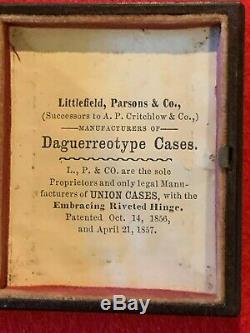 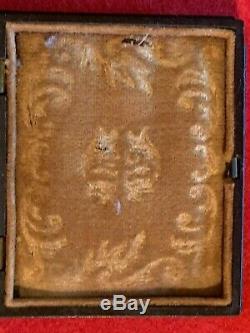 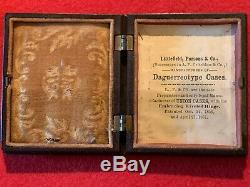 CIVIL WAR PERIOD ORIG AMBRO MILITIA OFFICER W/ MEDAL. Clear 1/9 plate image of a military officer, possible militia, probable Confederate. He wears a medal of some sort on his left breast. Years ago when I bought this image I thought it might be a Sabine Pass medal, the only medal issued by the Confederate Government during the war.

I've never been able to magnify it enough to discern just what the medal is. This guy could be from anywhere.

But his uniform is Civil War period and he has a distinctly southern appearance- to me he looks Louisiana. The uniform is NOT Confederate regulation because of the shoulder rank straps, but militia units especially in early war did not conform to Confederate uniform regulations. Either way, it's a great image of a period officer. The gem of the image is the thermoplastic hard case with an intact maker label inside from Littlefield, Parsons & Co.

Which claimed they were the sole legal makers of Union Cases. After 30 years of collecting Civil War relics I've decided it's time to let them go.

I will be listing many great items; images, buttons, knives, swords in the near future so keep an eye on my listings! The item "CIVIL WAR PERIOD ORIG AMBRO MILITIA OFFICER With MEDAL PROB CONFED FREE SHIPPING" is in sale since Sunday, July 19, 2020. This item is in the category "Collectibles\Militaria\Civil War (1861-65)\Original Period Items\Photographs". The seller is "dieselman53" and is located in Piketon, Ohio.