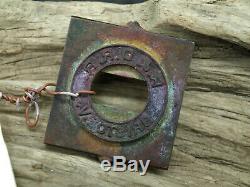 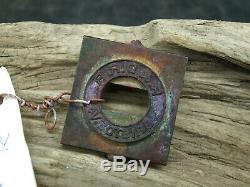 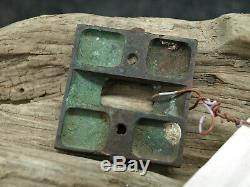 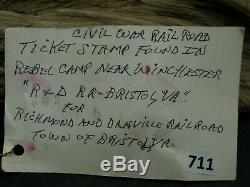 THE LAST PHOTO IS A PROVENANCE CARD WRITTEN BY THE ORIGINAL OWNER. HE HAD THE LARGEST ESTATE OF CIVIL WAR COLLECTIBLES I'VE EVER SEEN. HE WAS ALSO A DIGGER WHO FOUND MANY ARTIFACTS ON HIS OWN. HE WAS A WW2 VETERAN WHOSE ESTATE IS CURRENTLY BEING LIQUIDATED. MEASURES 1 3/4" X 1 3/4". Known as the "first railroad war, " the American Civil War left the South's railroads and economy devastated. In 1862, the Richmond and York River Railroad played a crucial role in George McClellan's Peninsula Campaign.

After the war, it was to be acquired by the Richmond and Danville (R&D) Railroad. The Richmond and Danville Railroad was an essential transportation link for the Confedracy throughout the war. It provided the production of south-central Virginia to Richmond. When the Richmond and Petersburg Railroad was cut in 1864, the R&D's connection with the Piedmont Railroad was the only remaining connection from Richmond to the rest of the South. During the Civil War, the Confederate Army was handicapped by a lack of supplies when there often were plenty of supplies in the depots, but the quartermaster corps of the southern army was unable to deliver the goods efficiently.

In one case, however, the war finally forced the Confederate government to over-rule objections by North Carolina. That state had blocked construction of a rail connection from Greensboro to Danville, fearing that after the war trade from North Carolina's Piedmont would continue to flow to Richmond via the R&D. Following successful Union attacks on April 1, 1865, Confederate Gen. Lee decided to abandon Petersburg and head west and south in an attempt to join Gen. Joseph Johnston's army in North Carolina.

After evacuating Richmond the next day, on April 2, 1865, Confederate President Jefferson Davis and his cabinet left Richmond on the R&D. The departing Confederates set fire to the bridge across the James River between Richmond and Manchester. They traveled to Danville, where they attempted to set up a temporary government.

On reaching Amelia Courthouse during the morning of April 4, 1865, Lee's first thought was for the commissary stores. He found ordnance supplies in abundance, but no food. Lee waited 24 hours in vain there for R&D trains to arrive with badly needed supplies.

Union cavalry, meanwhile, sped forward and cut the Richmond & Danville at Jetersville. Lee had to abandon the railroad, and his army stumbled across rolling country towards Lynchburg. On the morning of April 9, 1865, Palm Sunday, Lee met Grant in the front parlor of Wilmer McClean's home near Appomattox Court House to surrender. 30 Day Return Option Available. Veteran Owned Small Business U.

We Aim To Earn Your 5 Star Feedback. The item "CIVIL WAR RICHMOND & DANVILLE RAILROAD TICKET STAMP BRISTOL VA (C3)" is in sale since Saturday, August 1, 2020. This item is in the category "Collectibles\Militaria\Civil War (1861-65)\Reenactment & Reproductions\Photographs". The seller is "appalachianantiqueswv" and is located in Berkeley Springs, West Virginia. This item can be shipped worldwide.