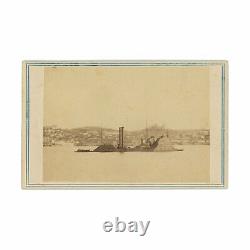 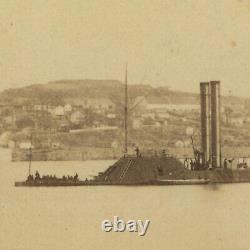 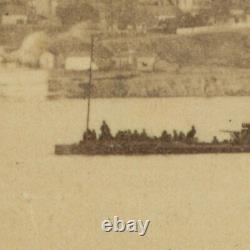 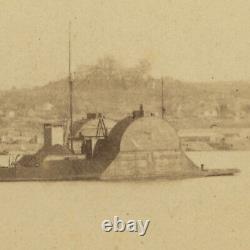 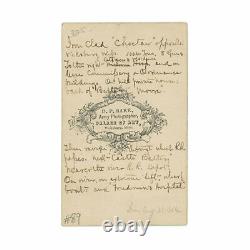 Barr, Vicksburg, Mississippi, of the Union Navys ironclad ram Choctaw with the city of Vicksburg in the background in 1864. There is a lot of detail in this image. A group of a dozen or so sailors can be seen resting on the bow beneath the Navy jack. Two cannon are visible peeking out from the casemate, while a sailor stands on the deck above.

Other sailors can be seen standing at various points on deck and in the small boat tied up amidships. Much can be seen of Vicksburg in the background. A lengthy description is written on the reverse of the carte.

Ironclad Choctaw opposite Vicksburg Miss. To the right, citizens residence and on levee, Commissary & Ordnance buildings. On hill, private houses back of Battery Moore. Then range through which R. On river, on extreme left, wharf boats and Freedmens Hospital. Photographer Barrs imprint also appears on the reverse. The CDV is in excellent condition with light toning. Measures about 4 x 2 1/2. The one-off sidewheel steamer was built in 1856 at New Albany, Indiana.

USS Choctaw was commissioned in March 1863. Her new configuration was designed by Commodore William D. Like the Porter-designed Lafayette, Choctaw was incredibly imposing, but was overweight and far too slow for effective use as a ram. Entering service, she steamed up the Yazoo to engage the Confederate batteries at Haynes' Bluff between April 29 and May 1, 1863, being struck no less than fifty-three times. Choctaw remained on station and contributed to the destruction of the Confederate works and navy yard at Yazoo City later in the month.

In June she joined in repelling an attack at Milliken's Bend, rescuing a number of Confederates from the river and taking them prisoner. During the spring of 1864 she was engaged in operations that preceded the capture of Fort DeRussy. Please see my other items for more Civil War CDVs. The item "Incredible Civil War CDV Navy Ironclad USS Choctaw at Vicksburg, Mississippi" is in sale since Friday, August 13, 2021. This item is in the category "Collectibles\Photographic Images\Vintage & Antique (Pre-1940)\CDVs". The seller is "iron-horse-sales" and is located in Champaign, Illinois. This item can be shipped to United States.