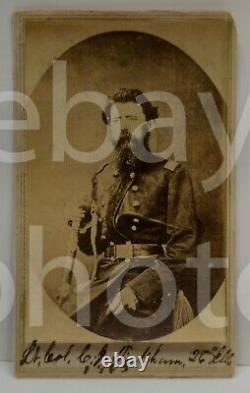 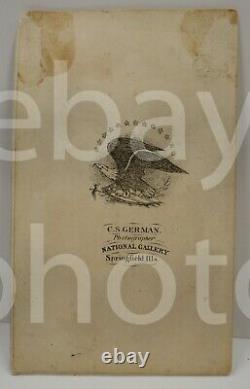 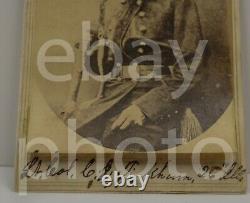 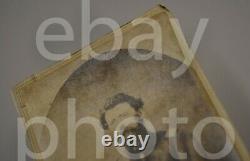 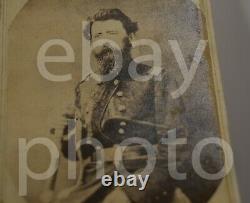 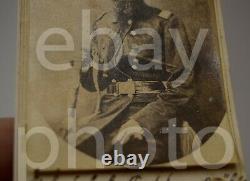 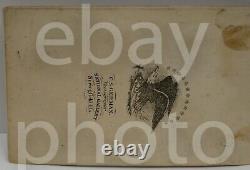 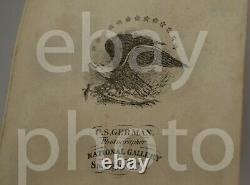 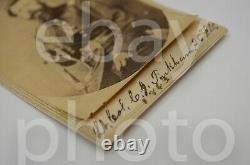 Tinkham 26th Illinois Volunteers Civil War CS German CDV Photo 1863 There are 18 photos of the item below. -- The photos load incrementally below depending on your connection, please allow a few seconds for the photos to appear --- From a local art/photography collector. I've had CDV's before that were photos mounted on heavy studio cards, this is a 3 paper layer card with attached photo so it doesn't feel or look like a "card" a very thin card layer between the back C. S German logo paper layer and the front paper gold gilded line frame border layer. The outer dimensions are 2-7/16" x 4" (almost 4-1/16).

The photo is detaching on the bottom, there is a small hole in the photo paper at the lower oval edge where the sword bottom is located. I'm not sure of the photo process. The photo has finish spotting, spots of residue etc, surface wear.

The hand written description reads Lt. On "find a grave" there is the same photo shown (looks like possibly a cabinet card). A generous gift of Miss Daisy Tinkham Babb, this federal full dress coat belonged to Charles Johnston Tinkham, Lt. Of the 26th Illinois Volunteers.

Born in Covington, Kentucky, Tinkham graduated from West Point Academy in 1849, and worked as a civil engineer. He later settled in Homer, Illinois, until his marriage to Caroline Coffeen on May 14, 1860. With the coming of the Civil War, Tinkham helped to organize Company F of the 26th Illinois Volunteers regiment and was commissioned as Captain on August 10, 1861 by Governor Richard Yates.

After less than a month of service, Tinkham was promoted to Lieutenant Colonel on August 31, 1861. Armed only with hickory clubs, the 26th Illinois began their career with guard duty in Quincy, Illinois. After guarding the Hannibal and St. Joseph Rail Road, the 26th were assigned to Brigadier General J.

Plummer's Brigade on February 19, 1862. Tinkham and the 26th Illinois Volunteers engaged Confederate troops at New Madrid, Missouri and took part in the siege of Corinth, Mississippi. On May 9, 1862, the 26th were engaged in Farmington, Mississippi where Lt. Tinkham suffered a wound to his right hand. Though he would stay with the 26th Illinois Volunteers until Fall, Tinkham resigned his commission on October 7, 1862.

The article continues with a more detailed description of the uniform itself. -- See photos for condition details. -- I don't have a way to arrange for a local pick-up of this item, I'm sorry for the inconvenience. The item "Lt Col C.