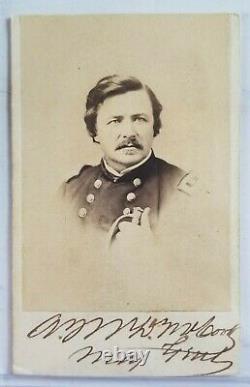 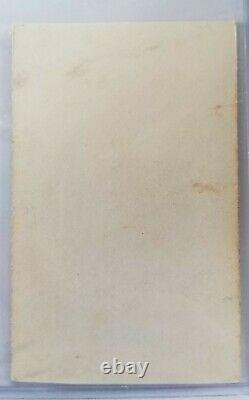 Lee (signed), politicians and a few notable writers and abolitionists during CW. The album was not salvageable but thankfully the photos were all in very good condition. We did not obtain a COA on this CDV but have on other signed photos within collection, and feel certain the signature is authentic. Please zoom in on all pics as part of description and ask questions.

We welcome inquiries and want new owner to be pleased with their acquisition. Follow our store our feedback is spotless and we focus on rare and unique. Major-general, was born in Columbiana county, Ohio, April 22, 1831. He was graduated at the United States military academy in 1852, served for a time on garrison duty, was then engaged against the Apaches in New Mexico until 1857, and was subsequently assistant instructor in infantry tactics at West Point, becoming 1st lieutenant in At the beginning of the Civil war he was commissioned colonel of the 1st Ohio regiment, with which he engaged in the defenses of Washington, May-July, 1861.

He was promoted captain in the 3d U. Infantry, May 14, 1861; participated in the skirmish at Vienna, Va. June 17, and at the battle of Bull Run, where he commanded his regiment, he won the brevet of major for gallantry. He was appointed brigadier-general of volunteers Sept.

3, 1861, and commanded a brigade in the operations in Kentucky, from Oct. 1861, and the 2nd division, Army of the Ohio, under Maj. Buell in the Tennessee and Mississippi campaign, Feb. He was brevetted lieutenant-colonel at the capture of Nashville, March 3, 1862, and colonel on April 7, for services at Shiloh. In the advance upon the siege of Corinth he commanded the reserve of the Army of the Ohio, his division engaging, however, at Bridge creek and at Serratt's hill, and he then served in northern Alabama and in east Tennessee, being commissioned major-general of volunteers July 17, 1862. He was then placed in command of the 20th army corps, with which he served in the campaigns of Perryville, Stone's river, Tullahoma and Chickamauga. He was relieved of his command, Oct. 6, 1863, shortly after the battle of Chickamauga, and asked for a court of inquiry which found him free from all blame. 1865, was placed in command of the eastern district of Arkansas. He represented the war department in the investigation of Indian affairs May 6, 1865.

On March 13, 1865, he was brevetted brigadier-general U. For gallant and meritorious services at Perryville, and major- general U.

For services in the field during the war. McCook was mustered out of the volunteer service, Oct. 21, 1865; was appointed lieutenant-colonel of the 26th infantry, March 5, 1867; served subsequently on the staff of Gen. Sherman, and was promoted colonel of the 6th infantry, Dec. 16, 1880, commanding the infantry and cavalry school at Fort Leavenworth, Kan.

He represented the United States at the coronation of the czar of Russia, at Moscow, May 24, 1896, and was a member of the commission appointed by President McKinley to investigate the war department during the war with Spain, Sept. Source: The Union Army, Vol.