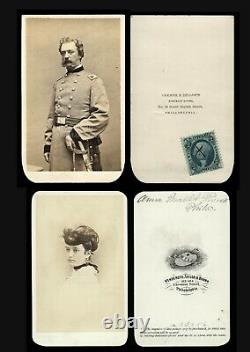 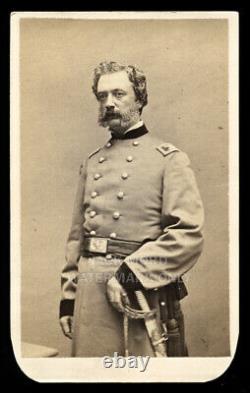 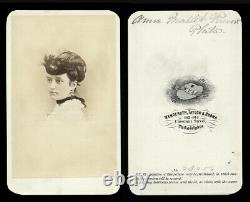 Two original CDVs: A rare pose of Charles Mallet Prevost, by Cremer & Dillon's, Philadelphia, and his daughter, Anna Mallet Prevost McMichael, by Wenderoth, Taylor & Brown, Philadelphia. 4" x 2.5"; some rounded corners that don't touch the images, otherwise in excellent antique condition. Bio found online: Civil War Union Brevet Brigadier General. A pre-Civil War lawyer and United States Marshall in the Wisconsin Territory, he was a Captain in the 1st Regiment of Pennsylvania Militia (known as the "Gray Reserves") when the conflict began. He was tabbed to served on the staff of Brigadier General Francis E. During the end of the September 1862 Antietam Campaign his regiment was engaged unsupported at Shepardstown, (West) Virginia against a sizable Confederate force. Colonel Prevost, in an attempt to stabilize his wavering line in the face of heavy fire, grabbed the regiment's colors and placed himself at the front line. Moments after doing so he was shot in the shoulder and severely wounded by a shell fragment. Carried from the field, his men would go on to sustain almost 300 casualties. Out of action for the rest of the year, he would come back to command his regiment prior to the May 1863 Battle of Chancellorsville before being fully recovered. In that battle his led his men while his arm was strapped to his side, and after the conflict was over it was apparent he could no longer effectively serve in the field. After being sent to Harrisburg, Pennsylvania to take charge of the Veterans Reserve Corps camp there, he resigned his Pennsylvania Colonel's commission on September 30, 1863, and was commissioned as Colonel of the 16th Veterans Reserve Corps on that date.

He commanded Camp Butler Military Prison in Springfield, Illinois from 1864 to 1865, received a brevet of Brigadier General, US Volunteers on March 13, 1865 for "meritorious services", and was honorably mustered out in June 30, 1866. The item "Rare CDV Photos Civil War Soldier Colonel Charles Mallet Prevost WIA & Daughter" is in sale since Friday, March 26, 2021. This item is in the category "Collectibles\Photographic Images\Vintage & Antique (Pre-1940)\CDVs". The seller is "jack_mord" and is located in Woodinville, Washington.