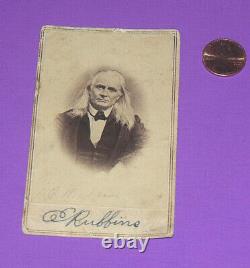 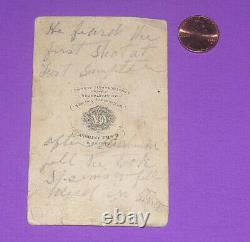 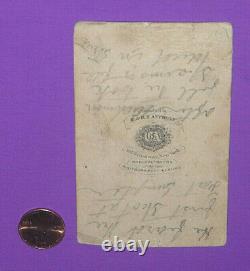 Civil War E & H. He was the Confederate soldier who fired the first shot at Fort Sumter that starrted the American Civil war.

This card was owned by Captain David Howard, a Union soldier. The most excellent and soon to be almost famous Howard family literally live next door to me. This is my first listing for that batch.

So please message me if you want to be notified when these items go up for sale. They will start within a week of 6/22/21 (today). Condition of card and details: Excellent antique condition, has some dirt on it from the war, and it is written on by the Union soldier who owned it in pencil. I left the pencil writing there.

Its your choice to remove it or not. I reccomend leaving the writing there on the card for historical value.

On the front you can see it says E Ruffins in script pen. I do NOT believe this is his signature. It looks too new and 2.

There is an S on the end of his name which shouldn't be there. HOWEVER, just above that signature is another signature in pencil without the S. This does NOT look like his signature, either because the Fs are looped and the R is different, etc.

But it might have been written by Captain Howard. I compared the writing to an old listing for a similar card on historical ha online. Anthony - Edmund Ruffin card. It should take you there. Edmund Ruffin, Ardent Secessionist, Credited With Firing the First Shot of the Civil War, Carte de Visite and Clippe.

It was the only hit I could find on this card on the Internet, although there are plenty of other cards around, like Robert E. Sedgewick, Belle Reynolds, General UNION!

Not just rebels, you see, yup. The back of the card has extensive writing on it from captain Howard. I have letters and diaries from him so you can compare the writing if you like. Message me for a writing sample.

Those letters and diaries will be up for sale soon as well. Plus a little extra because I have the only one as of a thorough Web search today on 6/22/21. You can look at multiple similar listings I mentioned above from different sellers to get an idea of the going rate. Here is what it says on the back in pencil, so its up to you if you want to erase it or not.

He fired the first shot at Fort Sumpter after Richmond fell he took sfsims? & fell died in strut? By the way, if you don't know who Edmund Ruffin is you are probably not reading this right now. But if you really do not know, that is OK.

A person cannot know everything all the time. So pause and look him up.

Its a very interesting story, and the guy, even though he is a totally evil S. Has an interesting back story. There is no use putting it here cuz that is what the Internet is for.

Anyway, the Wki page is pretty informative. OK, well, I will copy the first paragraph of the Wki article here just to be thorough, but please go ahead and read the whole Wikipedia article. If anyone needs me to take this quote down, please message me. I removed the citation numbers and hyperlinks.

Edmund Ruffin, III (January 5, 1794 June 18, 1865) was a wealthy Virginia planter who served in the Virginia Senate from 1823 to 1827. In the last three decades before the American Civil War, his pro-slavery writings received more attention than his agricultural work. Ruffin, a slaveholder, staunchly advocated states' rights and slavery, arguing for secession years before the Civil War, and became a political activist with the so-called Fire-Eaters. Ruffin is given credit for "firing the first shot of the war" at the Battle of Fort Sumter in April 1861 and fought as a Confederate soldier despite his advanced age. When the war ended in Southern defeat in 1865, he committed suicide rather than submit to Yankee rule.

Ruffin is also known his pioneering work in methods to preserve and improve soil productivity. He recommended crop rotation and additions to restore soils exhausted from tobacco monoculture. Early in his career, he studied bogs and swamps to learn how to correct soil acidity. He published essays and, in 1832, a book on his findings for improving soils.

He has since become known as "the father of soil science" in the United States. Don't get me started!

OK, back to Captain Howard, the soldier who owned this card Did I mention he fought for the Union? Well yes, and yes, he did. I have, like I said, a lot of history on him available by request.

One thing I do know about the great Captain Howard is that he had terrible handwriting and a 3. So when he writes he uses a lot of adult words and vernacular of the period and place, but he makes a lot of spelling mistakes. Don't get me wrong, Buddy he was smart and brave and hard-working. Its just that most people didn't have the early education most Americans take for granted these days.

Even so, it didn't stop him from doing a lot of writing. Plus the fact that he was on the move for the years of the Civil war, it was obviously very hectic. But we are doing our best to translate all of his writings so everyone can get the basic idea of what he was putting down during his walk of life in the war and in peacetime as well. I have said too much which anyone who has seen any of my more wordy listings knows about me to be my usual mode.

I like background and detail and history. I usually sell books and track down inscriptions and signatures and present their history along with any special features I can drum up, like ephemera, readers, extra books on the subject in the lot, etc. Sometimes I even include my notes so others can follow up on the endless Rabbit Hole that is the Internet search for a name. However, this upcoming batch for the Howard family has mostly photos and letters. It is also interesting that this card is the card with a picture of a Rebel on it. We are just the opposite of rebels. We are with the Blue side, originally from New York. There is nothing I can do about that. The South is NOT going to rise again. Listen children, this card is a reminder of what NOT to do. Listen, kids, when you grow up do NOT fire the fist shot at Fort Sumter.

If someone sees anther one, PLEASE let me know so I can consider altering my price. I always like to be the best deal around on everything I sell, or I usually put it in a box to open in 10 years and try again. I don't think I will have to do that with this.

This is an authentic card in decent condition. A lot of unfortunate people are still living in the racist past and this holiday is a first step towards reiterating in today's America and the world that All People Are Created Equal and in G-d's Image.

I believe that from the bottom of my heart. If you have a problem with that, please go shop somewhere else and go get yourself educated. If you are a normal color-blind person, please don't hesitate to drop me a line with any questions or comments.

Have a fantastic summer and thank you very much for reading my listing(s). SIGNED Abe Lincoln of Pigeon Creek William E. Wilson, HD DJ + 5 additional books.

That is one of my less wordy listings but still pretty detailed. You will love it if you love Lincoln like I love Lincoln! The item "Real Civil War E & H. Anthony Edmund Ruffin card Confederate fired 1st shot" is in sale since Friday, July 2, 2021.