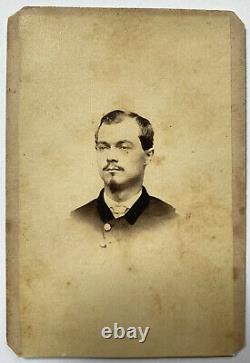 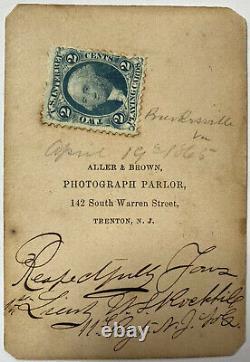 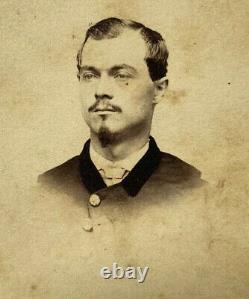 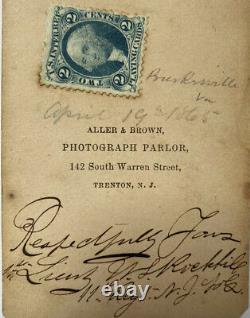 " This image was signed by Rockhill as; "Respectfully Yours, 1st Lt. " Backmark from "Aller & Brown. Photograph Parlor, 142 South Warren Street, Trenton, N. Information on Rockhill: William Summerfield Rockhill was born in April 1840 in Allentown, Monmouth County, New Jersey. He was the third child of William Chambers Rockhill {1807-3/29/1852} and Emma F.

However, the marriage would be quite short. On June 9, 1862, Carrie died at the age of 25 years old, having only been married to William Rockhill for a total of 1 year and 5 months. On June 18, 1862, just 9 days after the death of his wife, William Summerfield Rockhill enlisted in the Union Army. Rockhill was commissioned as a Sergeant and mustered into Company G of the 11th New Jersey Volunteer Infantry Regiment.

To give a correct idea of the percentage of loss, it will be well to state that at the commencement of the battle of Locust Grove, the regiment numbered less than two hundred men. The exact figures are not available. Searing, of Company E, who was a close observer and who made it a point to write down everything of importance that came to his notice, says that at the close of the battle we had only 105 men remaining with the regiment. After the end of the Civil War, 1st Lieutenant William Summerfield Rockhill of the 11th N.

Summerfield Rockhill and the second in 1870 (Herbert Wellington Rockhill). The 1870 United States Federal Census lists William S. Rockhill's occupation as "School Teacher" and his place of residence as West Windsor, Mercer County, New Jersey. The census also indicates he was still living with his second wife and two sons.

William Summerfield Rockhill died on June 13, 1878, in Freehold, Monmouth County, New Jersey, at the age of 38. His death resulting from the presence of a bullet in his body which he had received. Years ago while fighting for the Union in the Eleventh New Jersey Regiment.

Rockhill was buried in Allentown Methodist Cemetery in Allentown, Monmouth County, New Jersey. His veteran's gravestone was provided by the Gross Brothers from Lee, Massachusetts. Please refer to the images in this listing for details regarding the condition of the item. Offers on any items will be considered so long as they are reasonable. If you have any questions or concerns regarding and item or an order, please contact me. This item is in the category "Collectibles\Militaria\Civil War (1861-65)\Original Period Items\Photographs". The seller is "history-major" and is located in this country: US. This item can be shipped to United States.